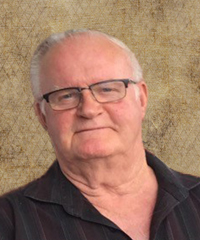 James Lawson McKinley, beloved husband and soulmate of Gladys, passed away on Saturday, November 28, 2020 at the age of 84 years. Lawson was born on January 3, 1936 in Medicine Hat, AB to Aubrey Gordon and Juanita (McWilliams). Their family was complete when their daughter/sister was born in 1939. Lawson is survived by his wife, Gladys; children, Travis (Shelley), Shawn, Wade (Nancy) and Natalie; grandchildren, Shay (Amanda), Dane (Stefanie), Brittney, Dakota, Raynee and Cayden; great-grandchildren, Adelynn, Torren and Olivia; sister, Joanne; as well as numerous nieces, nephews, sisters-in-law and brothers-in-law. Lawson was predeceased by his parents, Jack and Juanita; mother-in-law, Katie Miller; father-in-law, Peter Miller; brothers-in-law, Frank, Louie and Pete. During his youth, the family moved several times, finally settling in Medicine Hat. Lawson married Gladys Miller on July 5, 1958. They raised four children while working and tending a farm in the Whitla area. Upon acquiring Mae’s Trucking, they moved to Medicine Hat. The McKinley’s enjoyed an active social life being members of the Moose and Eagles. Lawson was also very creative with wood working. They enjoyed bowling, darts, golf and traveling. Even if the travels were only to the lot at the lake where many family gatherings were held. Lawson enjoyed fishing or just relaxing with a drink and conversation with friends and family. There was always pride and a twinkle in Papa Lawson’s blue eyes while watching his children, grandchildren and great-grandchildren. Many heartfelt thanks to all the Doctors, Nurses, friends and family, including nieces and nephews for their assistance and best wishes. Condolences may be sent to condolences@saamis.com subject heading Lawson McKinley. Funeral arrangements by