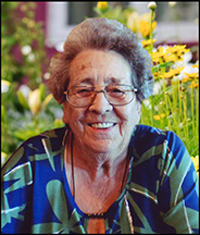 Gavina Pedersen (nee Burns) passed away in Medicine Hat on Sunday, December 27, 2020, at the age of 83 years. Left to cherish Gavina’s memory are her daughters, Mary Ann (John) O’Connor and Karen (Jeff) Holmes; grandchildren, Brendan (Meghan and daughter Gwenevieve) and Kristen (Will), as well as her brother, Jack Burns. She was predeceased by her husband, Bent. Gavina was born in Claresholm, AB., and grew up in Frontier, SK. At the age of 18, “Burnsie” joined the Air Force and was an Airwoman with the Military Police for the length of her tour. She then furthered her studies, receiving her designation as a registered nurse, and was working at the MH Auxiliary Hospital when she met Bent. They married in the fall of 1961, and had two daughters. They later formed Pedersen’s Floor Covering together where Gavina ran the daily operations of the store while Bent oversaw the installations. During this time, she was an avid softball player and curler, enjoying tournaments and bonspiels with friends. Gavina enjoyed traveling with her family to various destinations including Denmark, Fiji, Bahamas, an Alaskan cruise and frequent trips to Las Vegas over the years. She faithfully followed the girls in their sporting exploits, including many years involvement with Brownies, figure skating and trap shooting. Into retirement, Gavina was a consistent volunteer at many bingos, helping out several different charities on a regular basis. The family would like to thank the nursing staff of 4 West at the Medicine Hat Hospital for their strength and kindness, helping them bid farewell the only way allowed. A celebration of Gavina’s life will be held at a future date. (Condolences may be expressed by visiting our website at www.cooksouthland.com) Those wishing to remember Gavina may do so through a donation to the Medicine Hat SPCA, 55 Southwest Drive S.W., Medicine Hat, Alberta, T1A 8E8. Honoured to serve the family is