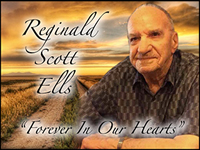 “Forever In Our Hearts”

Reginald Ells, beloved husband of the late Mrs. Mary Ells, passed away peacefully in his sleep at the St. Joseph’s Home – Carmel Hospice in Medicine Hat on Sunday, December 27, 2020, at the remarkable age of 101 years. Reginald’s memory will be cherished in the hearts of his children, Glennis (Wayne) Baum, Brenda Ells and Ryan (Tasma) Ells; grandchildren, Terri (Brad) Mappin, Dallas (Jeness) Wilkins, Tanya (Sean) Verret, Michael (Kendra) Reinsch, Marla (Dolan) Kerr, Jori (Pete) Peterson, Matthew (Lisa) Reinsch, Kailyn Baum (Mandy Dion), Lowell Baum, Reagan Ells and Mitchell (Josie) Ells; great-grandchildren, Riley, Brady, Poppy, Sierra, Sadie, Cosmo and Raelynn as well as numerous nieces, nephews and extended family. Along with his parents, John and Lucie (nee Scott) Ells, Reginald was predeceased by his daughter, Patricia Lee (Wilkins) in 1988, his wife, Mary Dorothy in 1993 as well as one brother and three sisters. Reginal Scott Ells was born on the family farm near Rowley, AB., on December 12, 1919. After WWII, Reg married Mary Sween of Redcliff. After he accepted a position with IXL Brick, the couple settled in Medicine Hat. Reg enjoyed a fulfilling 38 year career with IXL. Still with IXL, Reg and Mary bought a farm near Medicine Hat which they enjoyed well into retirement. During those years, they also began to travel, having adventures beyond our dreams. Sadly, Mary became ill and the couple were forced to sell the farm and return to the city in 1992. Reg continued to travel with family and friends for years. He was a role model and patriarch for the entire family, guiding with integrity and honesty. Papa lived a long and fulfilled life having just celebrated his 101st birthday! Due to Covid gathering restrictions, a private celebration of Reginald’s life has taken place. (Condolences may be expressed by visiting our website at www.cooksouthland.com). Those wishing to remember Reginald may do so through donations to the Royal Canadian Legion, Robertson Memorial Branch #17 at 702 – 2 Street S.E., Medicine Hat, Alberta, T1A 0E1. Honoured to serve the family is

One Condolence for “REGINALD SCOTT ELLS”