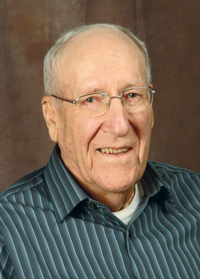 Lloyd Henry Sevalrud was born in Bow Island, Alberta on October 24, 1928 and spent most of his 92 years there. He passed away on February 16, 2021 at Good Samaritan South Ridge Village in Medicine Hat. Lloyd’s mother Ellen died in 1932, leaving four pre-schoolers who were raised by his father, Henry, assisted by his Aunt Minnie. Lloyd married Catherine (Cassie) Fisher, from Taber, in 1952. At that time he had his own trucking business and was a third- generation farmer south of Bow Island. Lloyd loved sports as a participant and a fan. He was invited to the Brooklyn Dodgers training camp three times before he was 20 and batted against Satchel Paige in an exhibition baseball game in Medicine Hat. In his later retirement years, he lived in Calgary to be closer to his six grandchildren: Robert, Clark, Austin (Katie) and Kevin Sevalrud; Graham Rapson and Layne Raddis (Josh), expecting the first great- grandchild. He developed strong bonds with his grandchildren who fondly recall his quick one-liners and repertoire of stories. He was predeceased by his parents, son Jim, former wife Cassie, and sisters Izora Bergh and Phyllis McGee. He is survived by his sister Avis Thomas, son Dave (Betty-Lynn Morrice), daughter Pat, and son Thom (Kevin Taylor), as well as nieces, nephews and grandchildren.

The family is grateful for the attentive health care he received. Memorial tributes could be made to the Multiple Sclerosis Society of Canada. A memorial service will be held when possible. Condolences may be sent through www.saamis.com or to inquiry@saamis.com subject heading Lloyd Sevalrud. Saamis Memorial Funeral Chapel is in charge of arrangements.