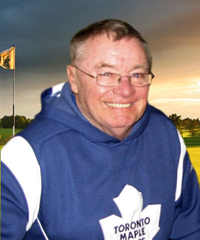 Mr. Alan Ogilvie, beloved husband of Carol Ogilvie, passed away in Medicine Hat on Sunday, February 28, 2021, at the age of 74 years. Alan was born on November 9, 1946, in Edinburgh, Scotland. His parents and his two sisters moved to Canada when Alan was just shy of his 11th birthday. He hated Canada and on their second day in Medicine Hat he hid under the seat of a Greyhound bus to make his way back and got as far as Winnipeg! His love for Edinburgh stayed with him his whole life through music, movies and books. On October 24, 1970, Alan married Carol Frances Lanz at St. Patrick’s Church in Medicine Hat. He worked for Dominion Glass for 25 years, until the day it closed. Following that, Alan began his work on the pipeline where he worked at M & N Construction for nearly 30 years. It was there that he made many lifelong friends, even though Alan retired he still kept up with what was happening in the pipeline world. One of his proudest moments there was when he was able to mentor his grandson, Mitchell. Although he often appeared grumpy, Alan had a charm that garnered him many friends. Once people got to know him, they realized his grumpiness hid a soft, kind heart and that Alan was really a shy guy. One of his favorite pastimes was golf. Alan taught his eldest daughter to play and then carried that on with three of his grandsons. All Alan’s grandsons ever wanted to do was beat him at a game of golf, which never happened. He was passionate about reading and spent many hours at the library. Alan could easily read a book in less than a day. He loved spending time working out at the Leisure Centre, although if truth be told, there was far more socializing than working out going on there. Alan also watched sports on TV, especially golf. He never missed a match, especially The British Open. Hockey was another sport Alan watched, although he would adamantly deny that he liked the game, yet he knew every stat and every player. Alan loved to watch his grandsons play sports, from lacrosse to hockey to football, he was there for it all. Alan thrived on knowing what everyone was doing and when we called him nosey, he would say, “I’m not nosey, I’m curious”. He regularly visited with his children and grandchildren, although his visits were only about 10 minutes… short and sweet. Alan’s favorite gestures and sayings were giving the middle finger, “Kiss My Ass”, “Dummy Up” and “Up Your Kilt”. If he did or said these to you, you know he liked you. Alan could often be heard saying, “You Canadians and your myths”, especially when talking about events like Mother’s Day, Valentine’s Day or anniversaries, all because of his lifelong love for Edinburgh. Alan’s memory will forever be treasured in the hearts of his wife, Carol Ogilvie; children, Annette (Roy) Graf, Patricia (Mike) Rolls, Renee (Kevin) Hirsch; grandchildren, Mitchell (Kassidy) Ogilvie, Daniel (Abi) Graf, Easton Hirsch, Jeremy Rolls and Logan Rolls; sisters, Rosemary Ogilvie and Dolores Powers as well as brother-in-law, Alvin (Gail) Lanz and sister-in-law, Betty (Ken) Melbourn. Alan was predeceased by his parents, Harry and Jean Ogilvie; mother-in-law and father-in-law, Eva and Jack Lanz; eldest grandson, Alexander Graf. We will forever miss our husband, dad, grandpa, brother and friend. Our wonderful memories will provide us comfort in the days to come. A private Celebration of Alan’s Life will be held at Cook Southland Funeral Chapel in Medicine Hat on Friday, March 5, 2021, at 11:00 a.m., with Life Celebrant Gerry Getz officiating. Those wishing to experience the Funeral Service via live streaming are encouraged to visit www.cook southland.com and click the View Broadcast button on the homepage at service time. If friends so desire, memorial donations in Alan’s name can be sent to Mission Mexico, c/o Alex’s Welding Shop, Catholic Pastoral Centre, 120 – 17 Avenue S.W., Calgary, Alberta T2S 2T2. (Condolences may be expressed by visiting our website at www.cooksouthland.com) Honoured to serve the family is