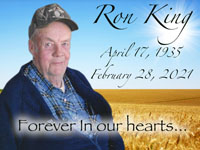 It is with heavy hearts that the family of Ronald Herman King, affectionately known by most as Tar, announce his peaceful passing at the Medicine Hat Regional Hospital on Sunday, February 28, 2021, at the age of 85 years. Ron leaves to cherish his memory three children, Reg (Marilyn) King, Russell (Michelle) Christopher and Michelle Christopher; grandchildren, Logan King, Mika Christopher-Moore (Harrison), Alex Grant and his son, Jacob Grant, Meagan Grant-Morales and her two sons, Gabriel and Giovani Morales, Melanie Hyland (Jason), Chelsey (TJ) Winquist and their two children, Alma and Perri Winquist. Ron will be lovingly remembered by his sister, Martha Henshaw as well as several nieces and nephews. He was predeceased by his wife, Louise King; parents, Walter and Pauline King; four brothers, Walter, Stanley, Henry and Fred; six sisters, Anne, Violet, Mabel, Mildred, Ethel and Agnes as well as in-laws, Myron and Francis Charnetski. Ronald Herman King was born the youngest of twelve children on April 17, 1935, to proud parents, Walter and Pauline King in Sceptre, Saskatchewan. Growing up, Ron worked on the family farm and dairy while also working for Clarence Grant at the Sceptre Garage. He loved sports of all kinds and excelled at baseball, curling and hockey. Ron married Louise Charnetski in Calgary, Alberta on October 8, 1963, proudly accepting her two children, Russell and Michelle Christopher as his own. On January 13, 1965, they completed their family with the birth of their son, Reginald Myron King. Ron looked after the family farm with his brother, Walter and eventually with his son, Reg. Ron and Reg developed a special bond through working the land, playing catch, their Sunday fishing trips to the river and evenings spent sitting and visiting out on the deck. Ron and Louise retired to Medicine Hat in 2011 where they enjoyed life together until her passing on November 23, 2019. Shortly after, Ron moved into the Teeoda Lodge where he continued to reside until his passing. He will forever be remembered for his very caring and understanding nature. Ron’s great sense of humour and the sound of him singing his funny little songs will forever resonate with his children, step-children and their families whom he loved dearly. Ron’s life will be honoured and his memory cherished without the proceedings of a formal funeral. (Condolences may be expressed by visiting our website at www.cooksouthland.com). If friends so desire, those wishing to honour Ron’s memory may do so through donations to the Great Sandhills Museum and Interpretive Centre, P.O. Box 29, Sceptre, SK., S0N 2H0. Honoured to serve the family is