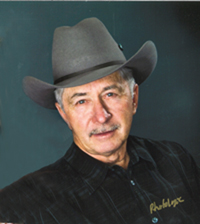 Mr. Leslie James “Les” Herman, beloved husband of Carol, passed away on Tuesday, March 9th, 2021 at the age of 80 years. He leaves behind to cherish his memory his wife, Carol; sons, Tim (Darlene) Herman, Greg (Donna) Herman, and Colin Herman (Mark Tagulao); grandchildren, Jenna (Jessie) Sanderson and Brendon Herman; brother-in-law, Ed Jans; sister-in-law, Bev Jans; numerous nieces and nephews through marriage; as well as his favourite old cat, Tiffany. Les was predeceased by his parents, Edward and Edna Herman. Les was born July 10, 1940 in Medicine Hat. Ranching was his entire life and it was his ambition to raise his family with respect and integrity. He served his community by working with various organizations…too numerous to mention. His family will honour his legacy, by continuing to “keep working together and keeping his family love as we move on”. Les lived at home on the ranch and received his final wish that was to pass there. He will be with us all, forever, in spirit. The family wishes to thank Dr. Jonker and Caring Hearts Medicine Hat for their excellent care and compassion. Our appreciation is extended to Cam Davis, Nathalie Lawrence, and the staff at Saamis Memorial Funeral Chapel for their care and thoughtfulness. At Les’ request no formal service will be held. Memorial gifts in Les’ memory may be made to AJ’s Loan Cupboard, P.O. Box 45006, MacKenzie Drug Post Office, Medicine Hat, AB T1A 0B1. Condolences may be sent through www.saamis.com or to condolences@saamis.com subject heading Les Herman. Funeral arrangements are entrusted to