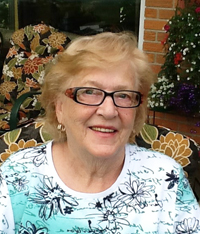 Alice Maria Versteegden of Medicine Hat, beloved wife of the late Theodore Versteegden, passed away on Sunday, March 14th, 2021 at the age of 86 years. Alice leaves to cherish her memory her two children, Lorraine (Randy) Stotz and James (Sandi-Rae) Versteegden; her four grandchildren; seven great-grandchildren; one sister; five brothers; as well as her husband’s family in Holland. She will also be forever remembered by her adopted families in Medicine Hat and Saskatchewan (Randy’s family and the Nittels). Alice was predeceased by her husband, Theodore and parents, Peter and Maria Kuilboer. All of these she loved and touched deeply. She was born November 23rd, 1934 in Slootdorp, Netherlands, one of 12 children. She spent her childhood in Alkmaar, Netherlands until at the tender age of 17 she immigrated with her entire family to Canada. After spending one year with their host family in Quebec, the family headed west to Taber, AB to labour in the local vegetable fields. After some time spent there, the family headed North to Edson and then at 21, Alice moved to the city of Edmonton where she began work at the “Dutch Mill” restaurant. It was when she was attending a Dutch Canadian Dance in Edmonton that she met the love of her life and future husband-to-be, Theodore “Ted” Versteegden. They married in 1956. Soon after, the couple welcomed their children, Lorraine and then, James. Together they raised their young family in the Jasper Place area of Edmonton. Later, Ted and Alice moved just west of Edmonton where they remained until 1979. It was that year that they moved to the acreage near Stony Plain and built their new home. They grew vegetables to sell and kept many beehives to produce AAA graded honey for the honey co-op. It was also at this time that they started their greenhouse operation. She loved selling her plants at the market. Alice lived a full life as a wonderful mother, homemaker, gardener and worker. After Ted’s passing, she moved to Medicine Hat where she was able to devote 17 years to developing and nurturing the flower gardens at her new home. Her hands were rarely still and the simplest pleasures in life brought her great joy. She was a very creative person and she loved to work on her oil paintings. She was also especially fond of making fancy Raggedy Ann dolls which she gifted to her “little ones” and also sold at many markets in Medicine Hat and Edmonton. Due to Covid-19 a private memorial service will be held at SAAMIS MEMORIAL FUNERAL CHAPEL, 1 Dunmore Road SE, Medicine Hat, AB. on Sunday, March 14th, 2021 with Gary W. Goran officiating. Attendance will be by family invitation only. Memorial gifts in Alice’s memory may be made to the Alberta Diabetes Foundation, 1 – 020 HRIF-East, University of Alberta, Edmonton, AB T6G 2E1. Condolences may be sent through www.saamis.com or to condolences@saamis.com subject heading Alice Veersteegden. Funeral arrangements are entrusted to