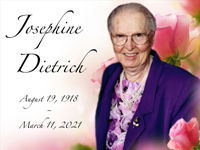 Mrs. Josephine Bertha Dietrich (nee Zunti), beloved wife of the late Michael Kasper Dietrich, passed away at AgeCare Valleyview in Medicine Hat on Thursday, March 11, 2021, at the age of 102 years. Josephine was born and raised on the family homestead North of Luseland, SK., on Monday, August 19, 1918, to Caspar and Anna Zunti. As an adolescent, Josephine enjoyed school and running long distance foot races. She often spoke of how her favorite teacher, Mr. Bates explained and demonstrated how she could run faster. After working as a domestic helper for families in the Luseland area, Josephine started working as Father J. Rheidt’s (0.M.I.) housekeeper. When Father Rheidt was reassigned to St. Anthony’s Parish in Mendham, Josephine moved with Father. While working as Father’s housekeeper in Mendham, Josephine met the love of her life, widower, Michael Dietrich. Josephine and Mike were married November 11, 1953, and spent the next 62 years together. Josephine was an active member and volunteer for her local Roman Catholic Parishes; St. Anthony’s (Mendham, SK), Little Flower (Leader, SK), Christ the King and St. Patrick’s (both of Medicine Hat). She was a founding member of the Little Flower Catholic Women’s League (CWL) and spent many hours volunteering with the CWL including their many teas and bake sales. Josephine’s signature coffee chiffon cake with 7-minute brown sugar frosting was not only a hit with her family but usually before Josephine could take “the cake” to the bake sale it was sold before it got there. Josephine loved gardening and always had a flower and vegetable garden behind the house in town and another vegetable garden twice or three times as large at the farm 10 miles away. She was always so proud of her roses in town and her raspberry bushes at the farm. According to local “garden raiders”, her’s were the “best peas” in town. With her “green thumb”, produce in excess of her family’s requirements was generously given to whomever was in need. From the produce of her gardens, Josephine always made sure there were wonderful healthy meals for her family and whomever came by unexpectedly. There always seemed to be an abundance of food at meal times. Josephine enjoyed her grandchildren and watching them grow up even if they didn’t really care for oatmeal in the morning. Josephine loved playing cards, particularly cribbage and Rookie and visiting with relatives and friends. Josephine and Mike spent many, many afternoons playing cribbage while being residence of the seniors home. Even after Mike had passed, Josephine continued to enjoy a lively game of cribbage with whomever would take the challenge and just before Christmas 2020, she still beat her son in a game. Josephine was always proud of her Swiss heritage keeping in touch with her immediate family and her Swiss relatives. She always loved dogs having had several “Heinz 57’s” that she could and did train to do all sorts of tricks. Josephine especially enjoyed it when Charles and Laverne came to visit with their miniature Schnauzers. We are not quite sure who enjoyed the visit more, Josephine or the dogs. Prior to retiring in Medicine Hat, Josephine and Mike enjoyed travelling taking trips to Australia, Alaska, Panama Canal, the Far East and Europe. During their lifetimes, Josephine and Mike generously donated to many charitable causes in their communities and beyond. She is lovingly survived by: step-son, Charles (Laverne, nee Luterbach), their children, Kent (Annie) their sons, Alexander and Benjamin; Michael (Robyn) their sons, Keelan, Graham and Wesley; son, Thomas (Jane, nee Boehmer) their children, Angela and her son, Sam; Mia (nee Candice) and her friend, Rabi; Kristen, her daughters, Olivia and Chloe; Nicholas, his daughter, Azia; Andrew (Evelyn) their son, Alec; she is also survived by her brother, Walter (Elsie, nee Greter) Zunti; sister, Dorothy and Marcel Lukan; sister-in-law, Agnes Zunti (nee Lukan) as well as numerous nieces and nephews. Josephine was predeceased by her husband of 62 years, Mike; parents, Caspar and Anna Zunti (nee Widmer); her sisters, Sr. Salesia (nee Alice Zunti) and Hilda Zunti; sisters and brothers-in-law, Louise and Joe Zimmer, Clara and Marcel Croteau; brother and sisters-in-law; Casper and Mary Zunti (nee Dietrich) and Aline (nee Rousseau/Lacoursiere); brother, Frank Zunti; her sister-in-law, Barbara Schell; sisters-in-law and brothers-in-law, Katherine and Joe Hubert, Margaret and Basil Dietrich, Eleanor and Mike Hubert, Anna and Steve Dietrich; nephew, Frank Dietrich and niece, Mary Williams (nee Dietrich). Due to Covid-19 restrictions, Vigil Prayers and the Funeral Mass will be by invitation only. Vigil Prayers will be recited at Cook Southland Funeral Chapel on Friday, March 19, 2021, at 7:00 p.m. The Funeral Mass will be celebrated at St. Patrick’s Roman Catholic Church in Medicine Hat on Saturday, March 20, 2021, at 11:00 a.m. with interment to follow at Hillside Cemetery. Vigil Prayers and the Funeral Mass will be live streamed. Those wishing to experience either of the services may do so by visiting Cook Southland’s website and selecting the ‘View Broadcast’ button on the homepage at service time. (Condolences may be expressed by visiting our website at www.cooksouthland.com). If friends so desire, memorial donations in Josephine’s name may be made directly to a charity of one’s choice. Honoured to serve the family is