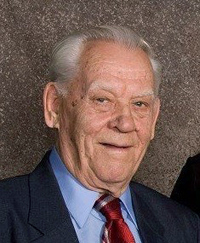 Victor George Skye of Medicine Hat, passed away on Thursday, March 18th, 2021 at the age of 89 years. Victor leaves to cherish his memory his daughters, Alice Hauck, Donna (Dale) Cove; son, Doug (Marcey) Skye; grandchildren, Katrina (Art) Hauck-Miller, Colin Hauck, Eli Cove, Angela Cove, Jade Skye; great grandchildren, Lucas, Xan and Aria; sister, Thersa Oddan as well as numerous nieces and nephews. Victor was predeceased by his wife, Donna; parents, George and Natalie Sky; son-in-law, Doug Hauck; sisters, Mary Elliott, Jesse Hawthorne and Rose Joseph; friend; Laura Schneider. Victor survived the 30’s on the farm near Maple Creek, SK. He often told stories of running a trap line and snaring wild rabbit for extra income and food. He practiced his skills as a gardener, canner and fisherman for many years. He left the farm and began his career for CP Rail in 1949. His jobs ranged from shoveling coal, to rail gang supervisor and signal maintainer. Victor and his family lived in many southern Alberta and BC communities over the years including Medicine Hat, Irvine, Blairmore and Field. Victor retired in Medicine Hat in 1988. He had a passion for travel. He and his siblings visited Lithuania and USSR while the Iron Curtain stood so they could meet their many cousins from the old country. Victor enjoyed loading his family in a truck and camper and heading south all the way to Mexico, Yellowstone, Disneyland and many sites along the way. After retirement Victor would regularly head south with his friends so they could escape the cold and enjoy the country music shows and night life in Las Vegas. Victor was a skilled carpenter, electrician, plumber, painter, drywaller and upholsterer. He owned and maintained a four unit apartment until well into his 80’s. We will miss you Dad! Rest in peace. The Funeral Service will be held at a later date. Memorial gifts in Victor’s memory may be made to the Canadian Cancer Society, 325 Manning Road NE, Calgary, AB T2E 2P5. Condolences may be sent through www.saamis.com or to condolences@saamis.com subject heading Victor Skye. Funeral arrangements are entrusted to