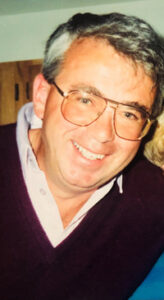 Dr. Michael Lee Hurrell Gammon or “Doc” as he was referred to by those who knew him best passed away In Brooks on March 23rd, 2021. Just as he dealt with experiences in life, he made sure it was on his terms. Born in Red Deer and raised in Grande Prairie, he went on to complete a Bachelor of Science in Pharmacy and certification in Family Medicine at the University of Alberta. Doc was a proud, well-respected man who gave so much to those around him and served the Brooks community since 1972. As a local doctor, he delivered generations of babies to families in Brooks and the surrounding areas. In addition to his work in the local community, Doc was a part of the College of Physicians and Surgeons of the Province of Alberta, The Medical Council of Canada, and Chief Medical Examiner. There was nothing he loved more than his family and friends and you could see how being around those closest to him brought him so much joy. Doc had a passion for golf, pheasant hunting and his German Short Hair Pointers, so you always knew where to find him in the summer and fall. Always willing to go the extra mile Doc was an active member of the Kinsmen Club, Brooks Golf Course, and spent many hours driving his daughters and teammates to sporting events throughout Alberta. He was a loving husband to Holly, an amazing father to his daughters, Kira (Pete) and Tanis and adored his grandsons, Harris and Sawyer. Rest in peace Doc, you will be missed and always in our hearts. In June of 2010 Doc was involved in a serious car accident just west of Brooks that required transportation to Calgary by STARS Air Ambulance. We ask that in memory of Doc, memorial tributes be made directly to STARS at 1441 Aviation Park NE, Box 570, Calgary, Alberta, T2E 8M7. We would like to extend a special thanks to the amazing staff at Brooks Homecare, Sunrise Gardens and the Long Term Care Unit in the Brooks Hospital. A celebration of Doc’s life will be arranged at a later date.

Cremation is entrusted to and conducted by Smith Funeral Home Ltd. and Crematorium, Brooks