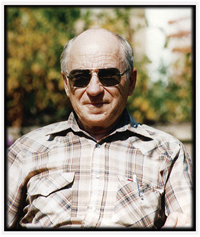 Fred was raised in Fox, AB on the family ranch. He moved with his parents to Medicine Hat in 1949 where he attended school. Fred was married to Mildred Jesse in 1953. He went onto trade school in Calgary for Auto Body Certification. Fred worked at Gardener Automotive, Ted’s Autobody and was the vehicle painter at BATUS for 22 years, retiring in 1994. He enjoyed gardening, woodworking and spending time with family. He was a dedicated member of the local ELKS Club earning the Best Bartender Award. Fred loved riding motorcycles and had many trips with his buddies. The family would like to thank the staff at St Joseph’s Carmel Hospice in Medicine Hat. A private graveside service will be held on Saturday, September 18th. A Celebration of life will be held at a later date. Condolences may be made at www.gracememorial.com. Arrangements made by

One Condolence for “FREDRICK MEIER”