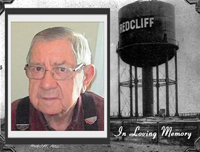 It is with heavy hearts, that we the family, announce the death of our beloved husband, father, grandfather, great-grandfather and uncle, Ralph Stanley Pinder, at the age of 91 years. Ralph passed away on November 17th. 2021 at South Country Village with his family by his side. Ralph is survived by his beloved wife, Viola Pinder (nee Anhorn), to whom he was married to for 69 years. He also leaves to cherish his memory his children, Richard (Michelle) Pinder and Shelley (David) Michalkow; six grandchildren, Alaina (Robert) Evans, Carrah (John) Walter, Gillian Pinder, Dr. Donovan (Amanda) Nunweiler, Nathan (Megan) Nunweiler, and Averley (Warren) VanOrman; 11 great-grandchildren, Tucker Evans, Tavin Evans, Brody Walters, Beau Walters, Ashton Leverton, Joshua Nunweiler, Kai Nunweiler, Anna Nunweiler, Steena Nunweiler, Ally VanOrman, and Grace VanOrman, sisters-in-law, Shirley Stefano and Edith Pinder; as well as numerous nieces and nephews. Ralph was predeceased by his parents, Stanley and Hilda Pinder and brothers, Robert Allen Pinder and Dennis Ronald Frank Pinder. Ralph was born on September 6th, 1930. He loved living in his hometown of Redcliff, AB and spent his whole life living there until he moved to South Country Village in his last years of life. Ralph was a born leader and believed in being active in his community. In 1945, while being a teenager, he organized a band of local Redcliff boys and performed for the first teen club in Redcliff. This was the Re-Teen Club and dances were held at the old Cameo Hall. Ralph played the saxophone. Ralph loved going fishing and in 1953 he organized the Redcliff Angling Association and served as president for years. He caught and smoked fish every year to help supply the luncheon for the Redcliff Angler’s annual banquets. He was one of the main organizers of the Cavan Lake Park camping and fishing grounds established in 1985. He built all the toilets and all the bird houses on the Cavan Lake Road. Ralph coached Little League baseball from 1961 to 1970. Ralph became a member of Town Council in 1966. He was chair of the Redcliff Recreation Board from 1966 to 1971 during which he initiated the development of the Redcliff Recreation Area which includes three ball diamonds, two tennis courts, a park and the Redcliff Arena. He was also an active member of the Lion’s building committee from 1967 to 1972 and spent many hours helping to build the Redcliff Curling Rink. Ralph was a founding memory of the Redcliff Museum and Historical Society which was formed in 1980 and still stands today. He believed Redcliff’s heritage needed to be preserved for future generations. Ralph was a member of the Redcliff Legion for 46 years. He served on the Recreation Parks and Wildlife Associations starting in 1983 under the direction of MLA, Al Hyland. Ralph was named as Citizen of the Year in Redcliff in 1985 in recognition of his many contributions to the community. Ralph started working for the Gunderson Brick and Coal Company ltd during the Summer of 1942. He started to work at Dominion Glass in December 1949 and worked there until his retirement in 1988. He worked in the packing room, became the foreman and then finally he became the shift superintendent of the whole plant. In 1995, Ralph was President of the Dominion Glass Historical Society and helped produce a book called, “Looking Through Glass”. Ralph’s hobbies were carpentry and gardening, and he excelled at both. In his later years, Ralph was an active member of the St. Ambrose Anglican Church in Redcliff. He played saxophone for the church choir. Ralph was a great family man and provider. He attended every baseball game, hockey game, figure skating and school concert that his children and grandchildren were participating in. He was always there for us. Ralph was well-loved and made friends everywhere he went. He has left a great legacy for his posterity. The family of Ralph Pinder would like to thank the staff at South Country Village for the excellent care and love that Ralph received. The Funeral Service will take place at Saamis Memorial Funeral Chapel, 1 Dunmore Road SE, Medicine Hat, AB T1B 1Z5, on Saturday, November 27th, at 2:00 pm with Dr. David Carter officiating. Due to current Covid- 19 restrictions service is limited to family members. Friends are welcome to participate via livestream by logging on to www.saamis.com and joining the live webcast on Ralph’s memorial page at the above date and time. A virtual guest book is available on the livestream page for those participating remotely. Donations in Ralph’s memory may be made in his name to the Alzheimer Society, 201, 770 – 6th Street SW, Medicine Hat, Alberta, T1A 4J6. Condolences may be sent to condolences@saamis.com subject heading Ralph Pinder. Funeral arrangements are entrusted to