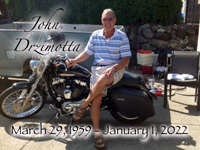 After hundreds of flights between mine sites around the world and homebase, Johnny passed away aboard a flight between destinations, at the age of 62 years. Left to mourn the loss of the best Dad jokes ever are his wife, Lorraine; their children, Daniel Drzimotta (Sonja Ridic-Drzimotta), Logan Drzimotta (Keri Grottenberg), Brenna Drzimotta (Shea Cameron); honourary children, Lindsay (Garreth) Haberstock; the newest decorations on the Christmas tree, grandchildren, Penny (Logan and Kerri’s) and Aleksandar (Daniel and Sonja’s); brother, George (Karen) Drzimotta, niece, Stephanie Slana as well as other nieces and nephews. John was predeceased by his mother, Gertrude; father, Walter; sister, Sonja; brother, Wally and the very many furry critters that had the privilege of residing lovingly in the Drzimotta household throughout the years. Also mourning are the many connections throughout the mining community here in Canada and abroad. First and foremost, our Cassiar, B.C. family, Tanzania, Mexico, South America, many mines throughout B.C. and Canada and that last flight from Baffinland Iron Mines. John held many positions starting from truck driver to Manager of Mining Operations throughout his career and was known for bringing many projects into full mining production, often beyond their targets. He will be greatly missed by many mining colleagues. A Private Celebration of John’s life was held yesterday at Cook Southland Funeral Chapel with Deacon Terry Olson officiating. (Condolences may be expressed by visiting our website at www.cooksouthland.com) Honoured to serve the family is