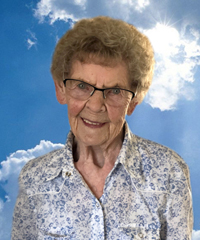 Wilhelmina ‘Minnie’ Christina van den Elzen, bleoved wife of the late John van den Elzen, passed away at the Provost Long Term Care Centre on Sunday, September 18, 2022, at the age of 95 years. Left to cherish Minnie’s memory are her daughter, Lorraine; son, Johnny (Eleanor and her children); granddaughter, Jennifer; one sister; John’s siblings as well as numerous nieces, nephews and friends. Minnie was born on November 6, 1926, in Zeeland, North Brabandt, Holland to proud parents, Wilhelm and Christina Peters. She married Johannes ‘John’ on March 23, 1954, and they immigrated to Halifax shortly thereafter. They then took a train to Raymond, AB., where they were sponsored. About a year after that, they moved to Warner where their daughter, Lorraine was born in 1956 and their son, Johnny was born in 1959. In 1961, John got a job in Lethbridge as a hired hand and in 1964, he rented a farm north of Bow Island where he farmed until 1972. After John passed away in 2012, Minnie remained on the farm for six years and then moved to Provost in 2018, to be closer to her family. Minnie will be remembered for her kindness and her hospitality as she always invited friends into her spotless, clean house that she took so much pride in. A Graveside Service will be held at the Bow Island Cemetery on Friday, September 23, 2022, at 10:00 a.m. with Pastor Murray Jaster officiating. A time of fellowship will follow at the Golden Age Club in Bow Island. (Condolences may be expressed by visiting www.cooksouthland.com) Honoured to serve the family is