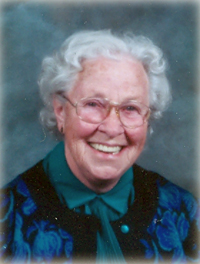 December 2, 1924 – July 24, 2015
Isobel “Teddy” Vano passed away peacefully with her loving family by her side at St. Joseph’s – Carmel Hospice, Medicine Hat, AB., on Friday, July 24, 2015 at the age of 90 years. Teddy leaves to cherish her memory four children; Penny (Terry) Scully of Calgary and their children, Michelle (Quentin) Wilson of Kipling, Saskatchewan, Timothy, Nicole (Mike) Fujda, Sean (Kristen), Shane (Morgan) and Christine Scully all of Calgary; Candy (Jeffrey) Neumann of Medicine Hat and their daughter, Heather (Les) Schneider of Medicine Hat; Lawrence Vano (Andrea) and her son, Graham Mainer of Whitehorse, Yukon; Robbie (Randy) Fairhurst and their sons, Curtis (Amber) of Calgary and Cameron of Redcliff as well as nine great- grandchildren. Teddy was predeceased by her husband, David Vano, her parents, Isobel and Richard Edwards and one granddaughter, Sherisse Scully. Isobel was born in Dartford, Kent, England on December 2, 1924. Teddy immigrated to Canada in 1950 to work as a physiotherapist in Edmonton. She moved to Calgary, where she met and married David and raised their family. Teddy worked for the Canadian Arthritis and Rheumatism Society for many years. In 1978 she and David moved to Beaverlodge, Alberta and she continued to work as a physiotherapist. Teddy and David moved to Redcliff upon retirement where she appreciated the hot weather and flora and fauna of the area, although a part of her heart remained in the Peace Country. Teddy would rather go for a walk picking rocks, fossiling and enjoying the great outdoors than clean house. If Teddy wasn’t going for a walkabout she was relishing watching all types of sports, especially football. “Go Stamps Go”. She became very involved in the community by driving for Meals on Wheels and modestly received the Volunteer Of The Year award for Redcliff. In her 90 years she was never without a four legged friend that barked, even at the Teeoda Lodge where Rover sat outside her door. Those wishing to pay their respects may do so starting one hour prior to Vigil Prayers which will be recited at Cook Southland Funeral Chapel, 901 – 13 Street S.W., Medicine Hat, AB., on Monday, July 27, 2015, at 7:00 p.m. The Funeral Mass will be celebrated at St. Patrick’s Roman Catholic Church, 238 – 2 Avenue N.E., Medicine Hat, AB., on Tuesday, July 28, 2015, at 10:30 a.m., with Reverend Father John L. Maes Celebrant. Immediately following the lunch in the Parish Hall, Interment will take place at the Redcliff Cemetery. If friends so desire, donations in memory of Teddy may be made to the SPCA, 55 Southwest Drive S.W., Medicine Hat, Alberta, T1A 8E8, for the prevention of cruelty to animals (Condolences may be expressed by visiting www.cooksouthland.com) Honoured to serve the family is

One Condolence for “Isobel “Teddy” Vano”