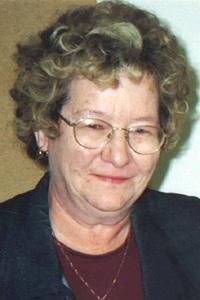 MRS. THERESA HALLER (nee Virostek) of Enchant, beloved wife of Mr. Larry Haller passed away suddenly after a brief illness on Saturday, September 22, 2012 at the age of 67 years.
Theresa was born on September 13, 1945 in Lethbridge, the youngest of 13 children to Mary and Sam Virostek. Theresa attended school in Enchant and Vauxhall High School. After graduating she worked on the family farm with her brothers for a year, then went on to attend Garbutts Business College in Lethbridge where she received her secretarial training. She received a job with Canadian Pittsburgh where she worked for a few years.
Theresa married Larry February 4, 1967 and together they raised 3 children, Cary, Robin, and Marcie on the family farm in Enchant, where she resided until her passing. She enjoyed farm life, old members and new friends at the enchant Golf Club, supporting and cheering on her children and grandchildren in all activities. Grandma loved to spoil her grandkids.
Theresa is survived by her husband of 45 years Larry, her son Cary (Melanie) and their children Tyler and Joshua, son Robin and his daughter Alexandra, and daughter Marcie (Bryan Wolfer) and their children Braxton and Damon. She is also survived by her sister Josephine Kondas, brothers Donald (Donna) and Wayne (Joan), sister-in-laws Shirley, Linda and Diane, as well as numerous nieces, nephews and cousins.
She was predeceased by her parents Mary and Sam, brothers Sam, Joseph, Michael, Vern, Lawrence, George, sisters Helen, Mary and Betty, and brother-in-laws Steve and Simon.
A Funeral Service will be held at 1:00pm on Saturday, September 29, 2012 at the ENCHANT COMMUNITY CENTRE, with Pastor Jeffery Frostad officiating. Interment to follow in the Enchant Cemetery.
In lieu of flowers, memorial donations may be made to the Enchant Hall or the Enchant Seniors Centre.
Send condolences at www.mbfunerals.com.
Martin Bros. Funeral Chapels Ltd.
610 – 4 Street South
Lethbridge, AB T1J 4P3
Phone: (403)328-2361 Fax: (403)382-3623
Toll Free: 1-800-382-2901
www.mbfunerals.com