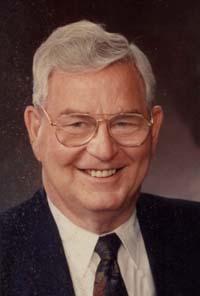 GRANT ERICKSON, beloved husband of the late Joanne Erickson, passed away Thursday October 4, 2012, aged 83 years. Mourning his passing are his children: Kathy, Steven (Leah), and Richard Erickson, and Michele (Earl) Goodwin; his grandchildren Riley, Carlene, Ben, Jordan, Joel, Tianna, and Jason Walburger; Clara, Olin, and Nathan Erickson; Claire and Russell Goodwin, Travis Cahoon; and Miles and Marcus Woolley.
He was predeceased by his infant son Russell, his wife Joanne, his parents Alif and Ruby Erickson, and his brothers Richard and Evan Erickson.
Grant was a teacher and a musician, teaching in the Lethbridge and area school systems for 35 years and finishing his career in the Raymond schools. As a band teacher and private music instructor, he gave a musical start to thousands of students. Midway through his career he served as Superintendent of Music for the Lethbridge School District, leaving as a legacy many music programs that exist to this day. He was respected as a composer and arranger, an accomplished trumpet and trombone player, and a sought after clinician.
Grant began playing music professionally at age 14, continuing for 69 years with many bands – including the Lethbridge Big Band, the Raymond Canadians and other dance orchestras. He played regularly for Lethbridge Musical Theatre and New West productions. He was most recently seen performing Dixieland weekends at the Rocky Mountain Turf Club where he played the “Call To The Post” at the racetrack for 13 years.
An avid supporter of the Lethbridge Symphony Orchestra, Grant donated many hours to the orchestra as a performer and a volunteer. After giving up his seat in the trombone section, he was a regular attendee at all Symphony concerts.
Devoted to his church, Grant served two missions, first in Tonga, and later with his sweetheart Joanne, on Temple Square in Salt Lake City. He served in various capacities over the years in his local congregation, and for the last several years as a temple worker in the Cardston, Alberta temple.
Friends may meet the family on Tuesday, October 9, 2012 from 7:00 to 8:00 p.m. at CHRISTENSEN SALMON GENERATIONS FUNERAL HOME, 703-13 Street North, Lethbridge, or prior to the funeral service on Wednesday from 10:00 to 10:40 a.m. at the church.
The Funeral Service will be held on Wednesday, October 10, 2012 at 11:00 a.m. at The Church of Jesus Christ of Latter-day Saints, LETHBRIDGE EAST STAKE CENTRE, 4105 Forestry Avenue South, Lethbridge. Interment in the Archmount Cemetery, Lethbridge.
Christensen Salmon Generations Funeral Home Ltd.
703-13 Street North
Lethbridge, AB T1H 2T2
Phone: (403) 382-3601
Fax: (403) 320-1492
Email: condolences@generationsfh.ca
Sign guest book: www.generationsfh.ca