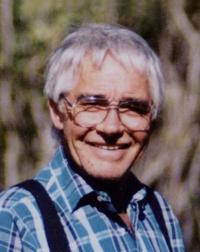 WILLIAM (DAVE) SAUERBERG passed away peacefully, after a brief battle with cancer, on October 5, 2012 just shy of his 75th birthday.
Dave leaves behind his blended family: his partner of 20 years Stella; sons: Merv (Bev), Cole (Tammy), Kelly (Nicole); daughter Perri (Rob); Stella’s daughter Brandi; along with many grandkids, nieces, and nephews who all adore him.
He is also survived by his brothers Grant (Judy) and Robert (Anne), and sister Linea. Dave was predeceased by his parents Earnest and Dorothy Sauerberg of Langley, BC.
Dave was born in Ladner, BC and moved to Alberta in the early 1980’s. He worked for many years as an animal feed salesman, travelling throughout southern Alberta, making more friends than anyone could count. Dave’s taste for racing was a common theme throughout his life. He got his first motorcycle in his early teens, and was recruited to the Fred Deely Race Team in the 1960’s. Later, his taste evolved to include stock cars – a passion he shared with his family. When he finished racing, his attention turned to restoring antique motorcycles and he received many awards for his meticulous work. Dave had a zest for life and will be remembered in many roles and by many names: Brother, Dad, Papa, Uncle, Grandpa, Bunka, Pappy, Kleine David, GOB, and a few more.
Thank you to all of Dave’s doctors, nurses, and caregivers. Your compassion truly made a difference to Dave and his family.
According to Dave’s wishes, a Celebration of Life will be held on Friday, October 12 at the Fritz Sick Memorial Centre (500 – 11 Street S) between 1 and 4 p.m. His family invites friends and acquaintances to share stories and truly celebrate his spirit with them.
Christensen Salmon Generations Funeral Home Ltd.
703-13 Street North
Lethbridge, AB T1H 2T2
Phone: (403) 382-3601
Fax: (403) 320-1492
Email: condolences@generationsfh.ca
Sign guest book: www.generationsfh.ca

No Condolences for “SAUERBERG William”