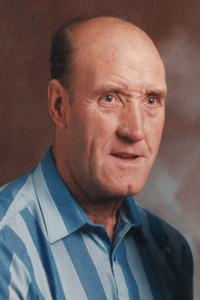 HERMAN BOLINK of Nobleford: beloved husband of the late Hilda Bolink passed away peacefully on November 2, 2012 at the age of 79 years.
He is survived by his two sons: Leonard (Gail) and David (Winny); 11 grandchildren; 2 great- grandchildren; brother Bert (Gert) Bolink. Herman was predeceased by his parents Gesina & Gerrit Jan Bolink; Sister Fanny Feenstra (Bolink).
Herman was born on December 28, 1932, in Nijverdal, Netherlands and immigrated to Canada in May of 1949. He retired as a dairy farmer near Monarch, AB. He devoted much of his spare time to Bible for Missions Thriftstore, Prision Ministry, and served as an elder at Nobleford CRC into his 70’s. Herman loved tinkering in his woodshop making furniture and gifts for strangers and loved ones. He was loved for his quiet sense of humor, his patience and unconditional love.
A Visitation will be held between 7:00 pm and 8:00 pm on Tuesday, November 6, 2012, at MARTIN BROS. RIVERVIEW CHAPEL 610 – 4th Street South, Lethbridge.
A Graveside Service will be held at 1:00 pm on Wednesday, November 7, 2012, at the Monarch/ Nobleford Cemetery.
A Memorial Service will follow at 2:00 pm on Wednesday, November 7, 2012 at the NOBLEFORD CHRISTIAN REFORMED CHURCH, 522 Highway Avenue, Nobleford, AB, with Pastor Kevin Jordan officiating.
Those who wish memorial donations may be made in Herman’s memory to the Rehoboth Christian Ministries, P.O. Box 1312, Coaldale, AB, T1M 1N1. coaldale_region@rehoboth.ab.ca
Send condolences at www.mbfunerals.com.
Martin Bros. Funeral Chapels Ltd.
610 – 4 Street South
Lethbridge, AB T1J 4P3
Phone: (403)328-2361 Fax: (403)382-3623
Toll Free: 1-800-382-2901
www.mbfunerals.com

No Condolences for “BOLINK Herman”