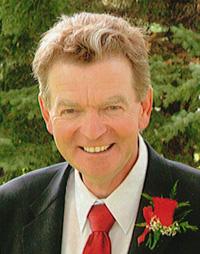 Maynard Arden Cornish, 58, of Pincher Creek, died suddenly Tuesday, December 18, 2012.
He was born April 16, 1954 in Wilkie, SK where he spent his childhood on a small farm. The family then moved to Langley, BC where he lived before moving to Cowley, AB to work as a ranch hand on the Glen Ranch. It was in Cowley where he met and married his wife MaryAnne (Loeffler) on May 27, 1978 and settled in Pincher Creek where he lived the remainder of his life.
Although Maynard worked as a ranch hand, carpenter, mechanic and pipefitter; he spent the majority of his working life as a trades foreman and superintendent in the oil and gas industry. In family tradition, he left numerous landmarks of his unmatched skill as a tradesman. If it was to be done, it was always to be done right. Maynard was a true Harley Davidson motorcycle enthusiast, taking every opportunity to enjoy his “hawgs and hiways.” Those who knew him best loved him for his true friendship and quick-witted sense of humor.
He is survived by his wife MaryAnne, his son Brad and wife Jacquelyn (Plourde), with grandkids Koehn Arden, Everett Jackson, and Birkley Renee of Stirling, AB; and his son Jeff and wife Kristina (Wolsey), with grandkids Paityn Marie and Shaylee Anne of Lethbridge, AB; and his daughter Candace Rae currently of Beeville, TX. He is also survived by his mother Joyce Cornish of Abbotsford, BC, mother-in-law Lorraine Loeffler of Cowley, AB, his five brothers, two sisters and numerous nieces and nephews.
A Funeral Service will be held at 1:00 P.M., on Saturday, December 22, 2012 at CHURCH OF JESUS CHRIST OF LATTER-DAY SAINTS, 1240 Wentworth Avenue., Pincher Creek, AB with Bishop Gordon Young Officiating. Interment to follow at Fairview Cemetery.
Memorial Donations may be made in Maynard’s memory to the Heart and Stroke Foundation, P.O. Box 2211, Lethbridge, AB T1J 4K7.
Eden’s Funeral Home and Crematorium
966 Elm Street
Pincher Creek, AB
Phone: 403-627-3131
Email: condolences@edensfuneralhome.com
www.edensfuneralhome.com

One Condolence for “CORNISH Maynard”