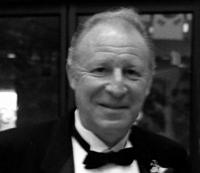 April 9, 1930 – December 19, 2012
Bill passed away at home on Wednesday, December 19, 2012 to join his wife for Christmas. He was born in Glencoe, ON. Bill worked his way through Toronto, Quebec and northern Ontario, before heading west to Lethbridge, AB where he met the love of his life, Shirley.
Bill was a father to Patricia O’Brien, Rod (Shannon) Hillman, Debbie (Terry) Thibodeau, and Bonnie (Paul) Pellicano; and was a loving grandfather to Nicholas and Michelle Pellicano. Bill is also survived by his Aunt Fran Howell as well as in-laws Sandra and Ken Daly, Lil and Art Krause, many cherished nieces, nephews, cousins and his longtime buddy John O’Shea.
Bill worked most of his life in sales. His career specialty was selling stationery and toys to drugstores, independents and department stores throughout Southern Alberta and SE British Columbia. He established “Hillman Novelties” and was a long serving concessionaire at the Calgary Stampede, Edmonton Klondike Days, Lethbridge Whoop-Up Days and other western Canadian fairs. Bill was a great salesman and cultivated friendships with many of his business contacts. He was a Golden Gloves Champ, an entrepreneur, the “main event” at sales meetings and, above all, a guy’s guy and a lady’s man. His handshake was strong until the end. He will be sadly missed.
Funeral Services will be held at McINNIS & HOLLOWAY’S Park Memorial Chapel (5008 Elbow Drive S.W. Calgary, AB) on Monday, December 24, 2012 at 2:00 p.m. Condolences may be forwarded through www.mcinnisandholloway.com.
In living memory of William Hillman, a tree will be planted at Fish Creek Provincial Park by McINNIS & HOLLOWAY FUNERAL HOMES Park Memorial Chapel, 5008 ELBOW DRIVE S.W. Telephone: 1-800-661-1599.

One Condolence for “HILLMAN William”