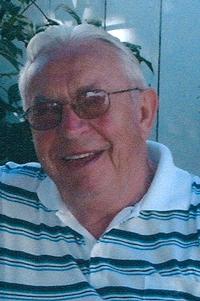 It is with great sadness that we announce the passing of our father GERHARD PAUL MOCH on Thursday, December 20, 2012 at the age of 85 years, with his family by his side.
Dad was born April 25, 1927 in Goschutz, Germany to Paul and Elly Moch, the oldest of three children. He married the love of his life Margarete Herta Seidel in Germany on February 18, 1949. Dad was known to his friends as “Gert” and to his grandchildren as “Opa”. Dad and Mom were blessed with two children while they lived in Germany – Hanna and Peter. They immigrated to Canada in 1954, residing in the Town of Coaldale. They were once again blessed with three further children who were born in Coaldale – Helen, Harry and May. They moved on to a farm in the Monarch area in 1962 and were blessed with two additional children who were born in the Lethbridge Hospital – Debbie and Robert. In 1976 they moved to Lethbridge living at 1517 St. Edwards Boulevard where there were many family gatherings & much fun to be had with his children, grandchildren and dear friends. In August, 2009 dad and mom moved to Martha’s House where he lived until his passing. They have met many wonderful special friends at Martha’s and have so enjoyed their new home here with the residents and staff members, whom they’ve come to know and love as “family”.
Dad started work at Enersons in 1954 as a body shop painter where he excelled and was sought out by many. He was also a dedicated member of the “Dollar Club” at Enersons. He worked at Enersons until the take-over by Davis and an illness in 1990 forced him to early retirement.
Dad instilled in his children and grandchildren to be hardworking, to be kind to all, to have fun and to enjoy every precious moment in life. The devotion and dedication to his wife, his children & his grandchildren was truly amazing. He treasured the time spent with all of them and took great pride & joy in being a father & grandfather and in guiding & supporting all of them.
Dad loved woodworking, gardening, camping, fishing (his favorite spot being Payne Lake), Vegas trips, the yearly Little Bow campouts, the many “Olshaski Park” campouts, playing the “dice” game. His favorite TV shows that he enjoyed with his family were NHL hockey, The Flintstones, Benny Hill and Lawrence Welk. He most enjoyed with mom spending time with his children, grandchildren and friends. His humour was extraordinary and you always left his home with a big smile on your face. He was unselfish and his focus was always on others around him.
Left with his memory are his seven children: Hanna (Don) Cox, of Lethbridge, Peter (Linda) Moch, of Lethbridge, Helen (Joe) Meszaros, of Lethbridge, Harry (Sue) Moch, of Calgary, May (Greg) Olshaski, of Lethbridge, Debbie Byrne, of Calgary, and Robert (Zelda) Moch, of Kelowna. His special son-in-law, Danny Byrne, of Calgary, has been left to mourn him.The grandchildren left to mourn him are: Quinton Cox, Trisha & Kostas D’Agnone, Breanne Cox, Craig Campbell, Troy Moch, Nicole & James Carefoot, Chad & Kate Eggebrecht, Sean & Heidee Walshe, Brent & Jodi Merriman, Jennifer & Mike Hall, Ryan Olshaski, Darcy Olshaski, Jessica Byrne, Daneel Byrne and Ashley Moch. The great-grandchildren left to mourn him are: Kingston D’Agnone, Dylan Todd, Leah Moch, Tyler Moch, Jackson Carefoot, Shayla Walshe, Hayden Walshe, Noel Merriman, Ashlyn Merriman, Ethan Merriman, Evan Merriman and Jillian Hall.
Dad was predeceased by his parents, Paul & Elly Moch, his in-laws, Werner & Herta Seidel, his brothers Herb & Heinz Moch, his grandson, Duane Moch, and his great-granddaughter, Christina Walshe.
The family would like to sincerely thank Monique from the Heart Function Clinic for her kindness & caring towards dad during his many weeks of stay in the hospital & for all of her help in maintaining his health until his passing. As well the family would like to sincerely thank Dr. Janzen for his compassion & care towards dad in his final days.
Dad will be so sadly missed and so lovingly remembered by his dear wife, his children, his grandchildren, his great-grandchildren and his dear friends. Dad was an amazing man and we are so proud of him. Dad leaves behind a legacy of fond memories and a family who dearly loved him and who will miss him terribly. Dad was a very caring and loving husband and father and grandfather. He is a one of a kind wonderful special man and he will never be forgotten. His spirit will live on in our hearts and minds forever. Dad is now at rest and peace. We love you so very much Dad “Opa” and we will miss you every single moment of every single day. Our lives just won’t be the same without you.
A Funeral Service will be held at 1:00 pm on Friday, December 28, 2012 at MARTIN BROTHERS RIVERVIEW CHAPEL, 610-4 Street South, Lethbridge. Interment to follow in the Mountain View Cemetery.
In lieu of flowers those who wish may make memorial donations to the Heart & Stroke Foundation of Alberta, Box 2211 Lethbridge, AB, T1J 4K7.
Send condolences at www.mbfunerals.com.
Martin Bros. Funeral Chapels Ltd.
610 – 4 Street South
Lethbridge, AB T1J 4P3
Phone: (403)328-2361 Fax: (403)382-3623
Toll Free: 1-800-382-2901
www.mbfunerals.com