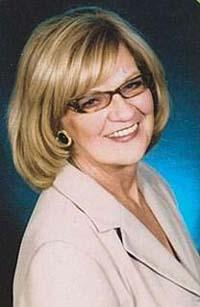 April 8, 1947 – December 21, 2012
We, the family of DONNA WILDE sadly announce her passing on December 21, 2012. Her brief battle with cancer started at the Lethbridge hospital and then ended in the Battlefords Union hospital. Donna was born and raised in the Battlefords. Her career as a realtor began in Saskatchewan then continued on in Lethbridge, AB, until her death. Donna was a generous, loving person who was respected by all who knew her. She was an avid gardener, and took pride in her yard and home. Donna was involved in the Rotary club and Bowling league. She had many interests such as traveling, golfing, politics, and the LDS church.
She will be greatly missed by, her husband; Dexter Wilde and his children, Carrie, Jaime (Brett), Tammy (Mike) and their children (Hayden and Salomon), and Shian (Chelsey), and their children (Corbin and Hadley). Her father-in law (Elmer Wilde) and mother-in law (Betty Wilde). Her son; Danny Joe Bertsch, and his children, Dakota Bertsch, Dantan Bertsch and Darby Bertsch. Daughter-in-law, Dana Bertsch and son-in-law to be Lorne Wohlberg. Her daughter; Chandra Bertsch and her children, Ethan Mohr, Dylyn Mohr and Coltyn Mohr. her sisters; Pat Ford (Brian), Karen Gabruch (Neil Curtis) and her brother; Dan Gabruch (Debbie).
Funeral Service was held at Battleford United Church Friday at 2pm, December 28, 2012.
Christensen Salmon Generations Funeral Home Ltd.
703-13 Street North
Lethbridge, AB T1H 2T2
Phone: (403) 382-3601
Fax: (403) 320-1492
Email: condolences@generationsfh.ca
Sign guest book: www.generationsfh.ca