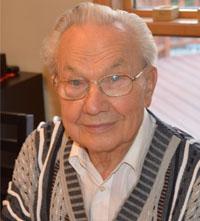 The family of Frank Gnandt Sr. wish to announce, with great sadness, his passing at St. Michael’s Palliative Care Center on Tuesday, January 1, 2013 at the age of 83 years. He is survived by his loving wife of 62 years, Elfriede; his son, daughter-in-law and family, Frank R. and Melody Gnandt (grandsons, Michael and Kevin); and his son Edwin E. and daughter-in-law Janelle Gnandt (grandsons, Jacob and Andre), his sisters, Anna Oesterle and Klara Mirk (Tom), and his half brothers Ron (Heather) of Oshawa, of Ontario, and Eric Gnandt (Doris) of Whiterock, B.C.
Frank was born in Hungary in 1929. His childhood was filled with struggles. He lost his mother at the age of 8, and experienced the turbulence of the inter-war years. He spent time in Hungary, Romania, Czechoslovakia, and settled in Germany, where he struggled each day to survive with his sisters and his father.
After the war, Frank moved to Limnau, Germany, where he met Elfriede, the love of his life. They soon married and moved to Raymond, Alberta; working for a local farmer, Balint Timko, in the sugar beet fields.
Life was hard for the newlywed couple but they eventually scraped out a living and moved to Lethbridge. Frank became a miller at Ellison Milling and remained in their employ for the rest of his career.
It was his family that brought Frank the most meaning and deepest joy. He was devoted to his wife, Elfriede. They shared everything together and truly were one, as a loving couple! They loved to dance and sing and be with friends. They demonstrated a loving relationship that was worthy of a romantic novel. They loved to travel each year to Hawaii and mingle with long standing friends at the German Canadian Club.
He was a devoted husband, father, grandfather, and friend. His quick wit remained until his last days. “Opa” will be sadly missed and fondly remembered by many.
A Prayer Service will be held at OUR LADY OF THE ASSUMPTION CATHOLIC CHURCH – 917 – 4 Ave. South on Friday, January 11, 2013 at 7:00 P.M. with Deacon Cliff Bogdan Officiating.
A Funeral Mass will be Celebrated at OUR LADY OF THE ASSUMPTION CATHOLIC CHURCH on Saturday, January 12, 2013 at 11:00 A.M. with Reverend Kevin Tumback Celebrant.
In lieu of flowers, donation may be made to the CANADIAN CANCER SOCIETY – 200, 325 Manning Road NE, Calgary, Alberta, T2E 2P5
Honoured to Serve
Cornerstone Funeral Home & Crematorium
2800 Mayor Magrath Drive South
Lethbridge, Alberta T1K 7B1
Telephone ~ (403) 381-7777
Fax ~ (403) 381-3128
Toll Free ~ 1-(888)-381-7778
care@cornerstonefh.ca

No Condolences for “GNANDT Frank”