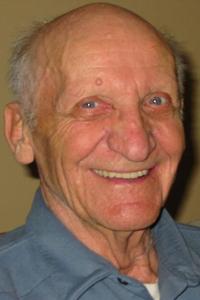 1923-2013
Glen passed away peacefully on January 12, 2013 at the age of 89. He was born April 17, 1923 in Salmon Arm, British Columbia to Eunice and William Gaskell. As he would so often share, this was the same birth date as his twin sister, Gladys. The twins were close. Their older sister, Ruth says “if you took on one you took on the other.” At the early age of six Glen and his two sisters rode the train across country to be raised under the watchful eyes of their grandparents, Sarah and Edward Gaskell.
Glen joined the Canadian Air Force in 1942 and while serving overseas in England, he met, courted and married Enid Mary Smith. Upon returning to Canada, Glen and his new family settled in Ontario. In 1950 the family moved to Alberta where he worked as an egg and poultry inspector for 28 years.
Over the years Glen proudly raised his six children, Marilyn (Ken) Butler, David (Fran) Gaskell, Rob (Gloria) Gaskell, Sue (Brad) Bengry, Brian (Barb) Gaskell, Shelley (Terry) Orr and (Robina Gaskell). He spent many hours with his family, camping in the summer, waterskiing, Christmas tree hunting and teaching us the value of family love and support.
In 1982 Glen married his second wife Sara Martens Gove adding to his clan step-children, Bonnie (Ron) Kaupp, Sandie (Dennis) Kaupp, Monte Gove and (Diane Gove).
He entertained us all with his great sense of humor and showed us how to be kind and generous. Glen was a devoted husband, father and grandfather, proud of all his children and often bragged about his 21 grandchildren, 35 great-grandchildren and 1 great-great-grandchild.
Throughout his life Glen developed many friendships and served his community well as an executive in his church, the Royal Canadian Legion and Army Navy and Air Force Veterans Association. Glen will be remembered for his smile, his kind and gentle nature, and the love he so readily shared with others. Perhaps Glen’s most endearing quality was his sense of humour and fun. With a twinkle in his eye he told jokes and pulled pranks on everyone.
He is survived by his wife, Sara and his two sisters Ruth Edna Suave-Schade (Neil) and Gladys Myrle Metz.
A Funeral Service will be held at 1:00 pm on Friday, January 18, 2013 at MARTIN BROTHERS RIVERVIEW CHAPEL, 610 – 4th Street South, Lethbridge.
Memorial donations may be made in Glen’s name to the Heart and Stroke Foundation, Box 2211, Lethbridge, AB T1J 4K7.
Send condolences at www.mbfunerals.com.
Martin Bros. Funeral Chapels Ltd.
610 – 4 Street South
Lethbridge, AB T1J 4P3
Phone: (403)328-2361 Fax: (403)382-3623
Toll Free: 1-800-382-2901
www.mbfunerals.com

No Condolences for “GASKELL Glen”