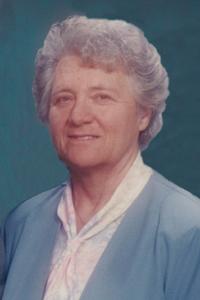 ANNA ELSA WEISS, beloved wife of the late Mr. Alfred Weiss, passed away peacefully in St. Michael’s Health Centre, Palliative Care facility on Saturday, January 12, 2013 at the age of 90, after a courageous battle with cancer.
Anna and Alfred immigrated to Canada form Germany in 1951 under the sponsorship of Martin Schmidt of Picture Butte. Anna and Alfred lived and worked on Mr. Schmidt’s farm as beet workers. In 1959 they purchased his farm, raised their three children Karl, Ingrid and Rita and lived on that same farm until 2011.
Anna enjoyed working in her vegetable and flower gardens and planted many trees over the years. She always had enough produce from her garden to give to friends and many flowers were enjoyed by visiting friends.
Anna was a welcoming person and enjoyed having company. Many people were fed in her busy kitchen even though they just happened to drop by. She could prepare a great meal at a moment’s notice.
In her later years, she enjoyed playing BINGO and making crafts at Golden Acres Lodge where she made some new friends who were saddened to hear of her illness. Anna will be sadly missed and fondly remembered.
Anna is survived by her daughter Rita (Don) Gross; grandchildren Kristina Gross of Lethbridge, Michael and Matthew Weiss of Silver Valley, and Melaina Weiss of Edmonton; her brothers Ernst and Karl Korner of Germany, numerous nieces and nephews; and daughter-in-law Karen.
Besides her beloved husband Alfred, Anna was predeceased by her parents August and Helma Korner, brother Hans Korner, daughter Ingrid Weiss, granddaughter Kassia Weiss, and son Karl.
A celebration of Anna’s life will be held at 11:00 am on Thursday, January 17, 2013 at CHRIST TRINITY LUTHERAN CHURCH, 416 – 12 Street South, Lethbridge, with Pastor James Krause officiating.
In lieu of flowers, if friends so desire, memorial tributes may be made in Anna’s name to the Canadian Cancer Society, 317 – 10 Street South, Lethbridge, T1J 2M7 or St. Michael’s Palliative Care, 1400 – 9th Ave. S., Lethbridge, AB T1J 4V5
Rita and family would like to thank Dr. Ireland and the Palliative Care team at St. Michael’s Health Centre for their support, special care and kindness they showed for Anna during her illness.
Send condolences at www.mbfunerals.com.
Martin Bros. Funeral Chapels Ltd.
610 – 4 Street South
Lethbridge, AB T1J 4P3
Phone: (403)328-2361 Fax: (403)382-3623
Toll Free: 1-800-382-2901
www.mbfunerals.com

No Condolences for “WEISS Anna”