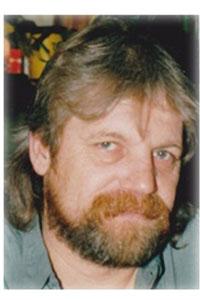 George Robert Span, beloved father of Amy Span of Lethbridge, Alberta tragically passed away in his Lethbridge home, on January 14, 2013 at the age of 58 years.
Besides his loving daughter he is survived by father Robert Span of Coalhurst , Netty (Fred) Tolsma of St. Albert, Sadie (Al) Stiksma of St. Albert, Arlene (Al) Miedema of Kelowna, Fran Ovis of St Albert, Anita (Doug) Tolsma of St. Albert, Rick (Marsha) Span of Lacombe, Tim (Lorrie) Span of Stirling. He is also survived by many nieces and nephews.
He was predeceased by his mother Francina Span, sister Sylvia Span, nieces Nicole Tolsma and Regina Span, and brother-in-law George Tolsma. All who knew George knew he sought people with kindred spirit. From his long hair, his once-in-awhile cowboy hat, and his not so funny jokes… This is the George we all know and love, whom we will continue to cherish forever.
A Visitation will be held at CORNERSTONE FUNERAL HOME – 2800 Mayor Magrath Drive South, Lethbridge, AB, where relatives and family are invited to meet with the family from 7:00 – 9:00 PM. on January 20, 2013.
A Memorial Service will be held at TRINITY REFORMED CHURCH – 1100 40th Avenue North on January 21, 2013 at 11:00 am with Hank Van der Woerd and Wybren Oord Officiating.
In memory of George Span, donations may be made to THE CANADIAN CANCER SOCIETY – LETHBRIDGE & DISTRICT UNIT – 317 – 10 Street South, Lethbridge, Alberta – T1J 2M7.
It would be appreciated if guests wore a splash of color, because we all know George has a colorful spirit.
Honoured to Serve
Cornerstone Funeral Home & Crematorium
2800 Mayor Magrath Drive South
Lethbridge, Alberta T1K 7B1
Telephone ~ (403) 381-7777
Fax ~ (403) 381-3128
Toll Free ~ 1-(888)-381-7778
care@cornerstonefh.ca

No Condolences for “SPAN George”