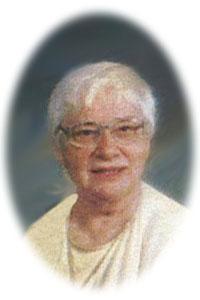 M.J. “JACKIE” EGAN, beloved sister of Jean Korth, passed away at Good Samaritans West Highlands on Saturday, January 19, 2013.
Jackie will be lovingly remembered by her godchildren Pat (Darren) Ramage, Kelly (Ryan) Casey, Vickie (Brian) Bethell, Craig (Leah) Robinson, several cousins and their families. She was predeceased by her very special husband Bill A. Egan, her parents Holly and Bob Turnbull and brother-in-law Henry Korth.
Jackie was a railroader’s daughter. Her Canadian & Scottish grandfathers, husband and sister all worked for the railroad. Jackie worked in the passenger department of C.P. Rail in Lethbridge, Banff and Winnipeg. After being married she came back to Lethbridge and worked until retirement with C.P. Transport. Jackie was a great volunteer and helped anyone in need. Her hobbies were sewing, knitting, weaving, cooking, woodworking and she was an avid reader. She excelled in making all sorts of crafts. Jackie was basically a “jack of all trades”. Jackie was a member of St. Andrew’s Presbyterian Church and Laurel Chapter O.E.S. She was a wonderful sister and will be greatly missed.
A Service of Remembrance will be held at CORNERSTONE FUNERAL HOME, 2800 – Mayor Magrath Drive South, Lethbridge on Wednesday, January 23, 2013 at 1:00 P.M., with Reverend Hugh Jack officiating. Inurnment will be held at a later date. No flowers by request.
In memory of Jackie, contributions may be made to the Heart & Stroke Foundation, PO Box 2211, Lethbridge, AB., T1J 4K7
Honoured to Serve
Cornerstone Funeral Home & Crematorium
2800 Mayor Magrath Drive South
Lethbridge, Alberta T1K 7B1
Telephone ~ (403) 381-7777
Fax ~ (403) 381-3128
Toll Free ~ 1-(888)-381-7778
care@cornerstonefh.ca