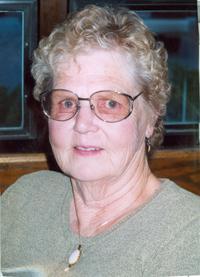 August 12, 1935 – January 26, 2013
Jeannine (Jean) Emily Haugen of Claresholm, beloved wife of the late Leo Haugen, passed away unexpectedly but peacefully on January 26, 2013. She will be lovingly missed by her daughter Bev (Jack) McLeod and their children Cameron and Allana; her daughter Connie Quayle (Marc Frigon) and her children Clint, Kirby, Kelsey and Cliff; her daughter Leslie (Phil) Martindale and their children Jody (Stuart) Armstrong and their children Mac and Hally, and Curt (Erica) Martindale and their daughter, Mya; her son Gordon (Ruth) Haugen; and her daughter Patty (Allan) Androkovich and their son Jordan. Jean’s children, grandchildren and great-grandchildren were above all else most important to her, so her house was always open and available to family, friends and neighbours. Mom loved to visit and was a great story teller. Many tales were told to the grandkids about when she was growing up. All the grandkids had many sleepovers at Grandma’s, both at the ranch and in town. Mom was born on August 12, 1935 at the family ranch on Meadow Creek. She was the 2nd child of Alex and Lizzie Bell and was raised at the ranch with her sister Florence (Matz), her brother Bobby (Bell) and sister AnnaMae (Mifflin). When Jean was 18, she married Leo Haugen. They owned and operated the ranch and raised their children until they retired to Claresholm in 1999. Mom learned to ride at an early age and liked riding and working the cattle with her family. She was a typical ranch wife and always had cows to milk, chickens to feed and a large vegetable garden to tend to. Jean was actively involved in the community as a member of the Meadow Creek Ladies Club as well as the Northern Light Community Hall Board. After moving to town she was an active member of the Seniors Drop-In Center, the Claresholm United Church, TOPS group and many other community organizations. Jean worked at the Claresholm Care Center in the laundry department for 15 years. She also actively played cribbage and canasta, and enjoyed organized bus tours. In town she continued with her love and dedication to gardening as her yard and flowers were the envy of many. Jean was predeceased by her loving husband Leo in Sept. of 2000, by her brother-in law John Matz, as well as numerous family members on the Haugen side. The family would like to sincerely thank the Claresholm General Hospital doctors and nursing staff for the excellent care she received during her stay. A funeral service will be held at the Claresholm United Church on Thursday, January 31 at 1:00pm Condolences may be forwarded to the family by visiting www.leydens.com. Arrangements entrusted to LEYDEN’S FUNERAL HOME, Claresholm. Tel: 403-625-3212