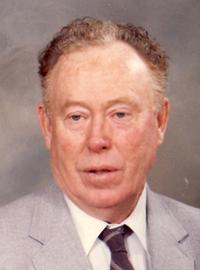 MR. KENNETH EDWARD WELSH of Milk River, beloved husband of the late Mrs. Irene Welsh passed away on Saturday January 26, 2013 at the age of 93 years.
Ken was born on January 22, 1920 to Edward & Catherine Welsh. He was raised on the family homestead east of Milk River and helped his mother with the farming from an early age. Ken attended school at Sleepy Hollow and later in Milk River. He married Irene Bair on February 16, 1942 in Lethbridge, and together they raised their seven children on the family farm. In 1952 Ken began raising registered grain in the Canadian Seed Growers Association and received their Outstanding Service Award in 1982. Ken moved to Milk River in 1978 but remained active helping his son Donald on the family farm. The family farm was recognized as a 100 year farm in 2008.
Ken was the founding chairman of the Chinook Gas Co-op, and also served on the first board of The Dry Land Feeders of Warner. He served on the Masinasin school board and Milk River school board for several years as chairman. Ken was also the President of the first Milk River Curling Club. He was an avid sportsman, playing baseball, hockey, curling and golf, and then promoting and encouraging his family and grandchildren with their sports. Ken was a staunch Milk River community supporter.
Ken is survived by his children Edward (Marilyn), Wayne (Nighean), Richard (Marlene), Karen (Erik) Cragg, Marilyn (Terry) McDonald, Cheryl (Archie) Mark and Donald; 20 grandchildren; 28 great-grandchildren as well as the Quinn family members, brothers-in-law John Bair and Fred Farmer and their families.
Besides his loving wife Irene, Ken was predeceased by his parents Edward & Catherine as well as a sister Cecilia Quinn.
A Funeral Service will be held on Wednesday January 30, 2013 at 11AM in the ST. PETER CATHOLIC CHURCH, 321 Main Street North, Milk River with Reverend Bob Wallace, officiating. Private interment will follow in the Milk River Cemetery.
Those who wish, memorial donations in Ken’s name may be made to the Milk River Ambulance and Fire Department, c/o the Town of Milk River, Box 270, T0K 1M0.
Send condolences at www.mbfunerals.com.
Martin Bros. Funeral Chapels Ltd.
610 – 4 Street South
Lethbridge, AB T1J 4P3
Phone: (403)328-2361 Fax: (403)382-3623
Toll Free: 1-800-382-2901
www.mbfunerals.com

No Condolences for “WELSH Kenneth”