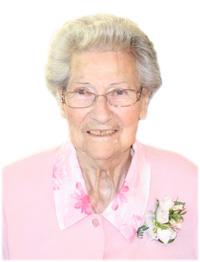 MRS. YVONNE M. WEHLAGE, beloved wife of the late Mr. Edwin J. Wehlage of Lethbridge, formerly Milk River, passed away peacefully with her family at her side at home on Thursday, February 7, 2013 at the age of 90 years.
Yvonne is lovingly remembered by her children; Annella of Lethbridge, Charlotte (Paul) Blust of Milk River and their children Stacy (Aaron) Skretting, Adam (Lea), Michael, and Warren; Eugene (Donna) of Coaldale and their children, Corbyn (Dalyce), Landon (Courtney), and Logan; Donald (Mary-Ann) of Cuba, New York, USA and their children Kimberley Thompson and Colin (Marlese) Thompson; Bernadette (Joe) Michielsen of Coaldale and their children Melissa and John; and seven great grandchildren; Evan Blust, Jacob, Paul and Anna Skretting, Vaughn Thompson, Boston Wehlage and Chloe Wehlage.
She is also survived by one brother Henry (Sylvia) Poirier of Calgary, one sister Eva Balog of Innisfail, brother in law Elmer (Marjorie) Wehlage of Milk River and sister in law Marie Wehlage of Lethbridge, as well as numerous nieces and nephews.
Yvonne was predeceased by her parents, her husband Ed, brothers; Albert Poirier, Wilfred Poirier, Edmond Poirier & her sister, Sr. Marion Poirier.
Yvonne was born October 18, 1922 in Hosmer, B.C. where she took her elementary schooling. At the age of 14 she moved to St. Mary’s Convent in Calgary to finish school at Lacombe Home and St. Mary’s School. She began her teaching career in Chisholm, AB, then moved to Wisdom, then finally Masinasin in 1944 where she taught Grades 1, 2 and 3. Yvonne met her special love Ed at a dance at Masinasin and married him in 1948. Yvonne chose to stay at home as her belief was “as long as Ed can feed me a piece of bread I’ll be happy”
Through the years, Yvonne’s priority was her family. Sundays were fishing and picnic days with homemade buns, cold fried chicken, potato salad, baked beans and raisin pie.
Yvonne was a role model to her children and was the family’s “Rose”. Yvonne was Ed’s special Rose.
A Prayer Service will be held at ST. PETER’S CATHOLIC CHURCH, 321 Main Street, Milk River, AB on Monday February 11, 2013 at 7:00 P.M. with Reverend Dominic H. Nguyen, officiating.
A Funeral Mass will be Celebrated at ST. PETER’S CATHOLIC CHURCH on Tuesday, February 12, 2013 at11:00 A.M. with Reverend Dominic H. Nguyen, Celebrant.
A Private Family Interment will take place at Allerston Cemetery.
Memorial Donations may be made to the Alzheimer Society, #402, 740 – 4th Avenue South, Lethbridge, AB, T1J 0N9.
Honoured to Serve
Cornerstone Funeral Home & Crematorium
2800 Mayor Magrath Drive South
Lethbridge, Alberta T1K 7B1
Telephone ~ (403) 381-7777
Fax ~ (403) 381-3128
Toll Free ~ 1-(888)-381-7778
care@cornerstonefh.ca