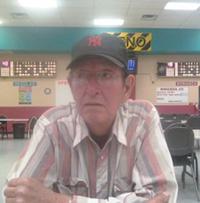 EDWARD CHESTER DAVIS was born on August 7, 1944 at the Blood Indian Hospital, Cardston, Alberta. After a long battle with cancer, Chester passed away peacefully and surrounded by family and loved ones on February 10, 2013, at the Cardston Hospital.
Chester leaves behind to mourn his passing his wife Bernadette, his children, Chester “Husky”, Niven (Stacey), April (Ovide), his stepchildren, Dwayne “Rusty” (Noreen), Burnis (Carley), Joshua (Crystal), Kris, Leo Paul, Desirae (Shawn), John and Cadence. His brothers, Wilbert, Wesley (Jeannie), sisters, Olive, Vivian, Thelma, Karen and his brothers and sisters-in-laws, Richard (Geraldine) Wells, Clayton, Wayne and Cory Twigg, Bertha Weasel Fat, Barbara Eagle Tail Feathers, Geri, Carolyn and Annette Twigg, and Sara (Luke) Wells.
He was predeceased by his first wife, Jeannette Wells, his parents, Edward and Jane Davis, his sister Juanita (Evans) Melting Tallow, his grandparents, Charlie and Rosie Davis, Tom, Mary and Cecile Russell, and by his parents-in-laws, Dick and Katie Wells, and James and Celina Twigg.
Chester was raised on the family farm located on the Blood Reserve. He received his initial education from St. Paul’s Residential School, and then later attended High School in Cardston and Medicine Hat. He also attended the Cadet Camp in Vernon, British Columbia. After completing his education, Chester returned to the Blood Reserve to work as a mechanic and to help on the family farm. He would later establish his own farm and took great pride in becoming a farmer.
Chester’s kindness and devotion to family and friends was the result of his upbringing. Being constantly surrounded and loved by family in his early years set the foundation of the person he was to become. He was the kindest, compassionate, caring, thoughtful, and devoted family man and friend to those lucky enough to be in his life. On September 8, 1983, Chester married his love, Bernadette. Together they blended their families and raised five children, April, Kris, Desirae, John and Cadence. Living on the farm they shared a love of gardening and spent many hours together tending to it. They also had lots of fun raising pigs and chickens. Chester also had a great passion for cooking and could put together a stunning dinner for any number of guests. Everyone left his company satisfied, as he had a talent for mastering several dishes. He also had a keen sense and ability to repair and build almost anything. The need to stay busy resulted in many interesting projects. Although he was quiet tempered, Chester was extremely humorous, and had exceptional comedic timing. Whenever he decided to break his silence he usually did so with hilarious comments, leaving those around him in stitches. Chester also enjoyed going to Bingo with his wife. He will be a man greatly missed by family and friends. The sadness of his passing reaches even those who only knew him briefly. He was a devoted family man and friend; he was kind and loving, and cared passionately for those in his life.
The Wake Service will be held at the St. Paul’s Anglican Church, Blood Reserve on Friday, February 15th, 2013 from 7:00 p.m. to 11:00 p.m. The Funeral Service will be held at the St. Paul’s Anglican Church, Blood Reserve on Saturday, February 16th, 2013 at 11:00 a.m. with Canon Allan McCuaig officiating. Interment in the St. Paul’s Cemetery.
E-mail condolences to: legacyfh@telus.net
Arrangements entrusted to Berry Gorham
Legacy Funeral Homes Ltd.
P.O. Box 208
Cardston, Alberta T0K 0K0
Phone (403) 653-3222
Fax (403) 653-3677
legacyfh@telus.net

One Condolence for “DAVIS Edward”