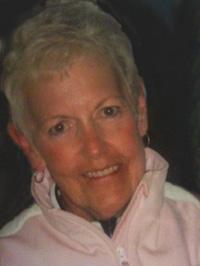 July 5th, 1942- February 19th, 2013
Surrounded by her family, GAILE RUSZNAK, of Lethbridge, passed away peacefully in the St. Michael’s Palliative Care Unit, after a courageous battle with cancer, on Tuesday, February 19th, 2013 at the age of 70 years.
Gaile was born in Coleman, Alberta on July 5th, 1942. She grew up in Calgary, moving to Lethbridge to complete her High School education. After that, she entered the Galt School of Nursing and graduated in 1963. She met the love of her life, Paul, in 1963 and married him a year later. They shared 48 wonderful years together and had four children. Gaile was an avid golfer and member of the Lethbridge Country Club for many years. She never missed celebrating her Galt School of Nursing Reunions every five years with her classmates. Gaile had a passion for playing Bridge and belonged to many groups establishing lifelong friendships. She enjoyed many years of family holidays to Mountain Shores and Osoyoos, British Columbia as well as two amazing family gatherings in Hawaii. Gaile and Paul belonged to a Gourmet Dinner Club for 35 years. They were able to enjoy three warm winters in Phoenix before Gaile became ill.
Gaile was a loving wife, mother and grandmother and she will be missed dearly by her family. Besides being survived by her husband Paul, Gaile is survived by her daughters, LaVerne (Paul) Krizan of Lethbridge and Sheri (Bob) Parsons of Calgary as well as her son Robert (Sheri) of Okotoks. Gaile was also blessed to have six grandchildren who were the light of her life: Michaela, Aiden, Robyn, Ryan, Jaden and Kylan. She is also survived by a brother-in-law, George (Connie) Rusznak of Okotoks as well as several nieces.
Gaile was predeceased by her son, most fondly referred to as her guardian angel, Cameron, her father-in-law, Paul Rusznak Sr., her mother-in-law, Ethel Rusznak, her sisters-in-law, Ethel Rusznak and Elsie Gyorfi and a brother-in-law, Bernard (Brown) Gyorfi.
Vigil Rites (Prayers) will be held at 6:00pm on Friday, February 22nd, 2013 at OUR LADY OF THE ASSUMPTION CATHOLIC CHURCH, 2405-12th Ave South, Lethbridge, led by Maureen Condon Horon.
A Funeral Mass will be celebrated at 11:00am on Saturday, February 23rd, 2013 at OUR LADY OF THE ASSUMPTION CATHOLIC CHURCH, with Father Roque Pereira celebrant.
In lieu of flowers, all those wishing to make a donation may do so in Gaile’s name to St. Michael’s Palliative Care, 1400- 9th Avenue South, Lethbridge, Alberta, T1J4V5.
Send condolences at www.mbfunerals.com.
Martin Bros. Funeral Chapels Ltd.
610 – 4 Street South
Lethbridge, AB T1J 4P3
Phone: (403)328-2361 Fax: (403)382-3623
Toll Free: 1-800-382-2901
www.mbfunerals.com

No Condolences for “RUSZNAK Gaile”