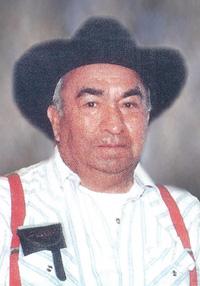 It is with great sadness that we announce the passing of Allan Shade at Cardston Hospital, Cardston, Alberta on Tuesday, February 19, 2013, at the age of 91.
Piinotoyi was given to Allan by his great-grandfather Makoyiina Big Wolf. He was born on February 6, 1922. His great grandmothers were the midwives. He was so sick so his grandfather Makoyaapi held a sweat for his great-grandfather who named him Piinotoyi during that ceremony. His health improved after that. Allan was given to him at his baptism. His parents are Kainaikowan Chris and Aapi sookaakii Kate (Scraping White) Shade. His paternal grandparents were Kainaikowan Fred (a non-Native) and Makkaakii Kanouse. His maternal grandparents were Makoyaapi Willie and Piinikii Annie (Big Wolf) Scraping White. His maternal great-grandparents were Makoyiina and Naatohkinni. His great-grandfather had three other wives which make him very rich in grandparents. His clan is the Aakaipokaiksi. His siblings are: Harry (Agnes Night Gun); Donald; Flora (Stan) Zaharia; Andy (Edna Kay); Agnes (Steven) Valerio; Gerald (Gloria Mills); Stella Marie; Tiny; and Harrison (Cynthia Many Fingers). Allan married Louise on June 24, 1946 and together they raised six children. They farmed and ranched on the west end of the reserve and later moved to the north end.
He was predeceased by his parents Chris and Kate; daughter Catherine; sons, Keith Shade and Oliver Shouting; granddaughters, Shyanne, Janice, Lane, and Shannon Red Crow; grandsons, Jason and Larry; siblings, Andy (Edna Kay), Donald, Tiny, Stella Marie and in-laws Stan Zaharia and Gloria Shade.
Allan is survived by his children: Chris (Sandra), Mavis (Dennis), Justin (Carrie) and Jocelyn (Keith), daughter-in-law Ann Shouting; 27 grandchildren; 71 great-grandchildren and 8 great-great grandchildren; 2 brothers: Gerald & Harrison; and sisters, Flora Zaharia and Agnes (Steven) Valerio. As well as special granddaughters Carmen Crow Eagle & Jolene Shade, whom he raised and they took care of him for 7 and 15 years respectively. Also his adopted children, Suzan Ferguson, Chester Day Chief, special and close cousin Dale and Sylvia Low Horn. Allan was a kind and gentle caring father and grandfather who was devoted to his grandchildren. He attended the Roman Catholic Residential School. He never got used to it. He always cried after his parents visits to the school. One winter day his father came on horseback to visit him. He was so lonesome that before he left, he stole his horse and rode it home. A friend brought his dad home. But nothing much was said about what he had done. After supper, to his great disappointment, his father told him to put on his coat and he took him back to the school. As a teenager he continued to farm and ranch with his dad. He also had contracts with Herman Linder to supply stock for all the southern rodeos starting the end of June at Fort Macleod. He enjoyed following the rodeo circuit and took part in calf roping.
A Family Service will be held at CORNERSTONE FUNERAL HOME 2800 Mayor Magrath Drive South, Lethbridge, Ab. on Monday, February 25th, 2013 at 4:00 P.M.
A Wake Service will be held at SENATOR GLADSTONE HALL, Blood Reserve, Ab. on Monday, February 25th, 2013 from 7:00 – 11:00 P.M.
A Funeral Mass will be Celebrated at ST. MARY’S IMMACULATE CONCEPTION CATHOLIC CHURCH, Blood Reserve, Ab. on Tuesday, February 26th, 2013 at 11:00 A.M. with Father Pawel Andrasz O.M.I Celebrating.
Interment to follow at the Blood Band Cemetery.
Everyone is invited to a feast at Senator Gladstone hall.
The family would like to thank the staff of the Cardston Health Centre for their exceptional service and compassion.
Honoured to Serve
Cornerstone Funeral Home & Crematorium
2800 Mayor Magrath Drive South
Lethbridge, Alberta T1K 7B1
Telephone ~ (403) 381-7777
Fax ~ (403) 381-3128
Toll Free ~ 1-(888)-381-7778
care@cornerstonefh.ca

No Condolences for “SHADE Allan”