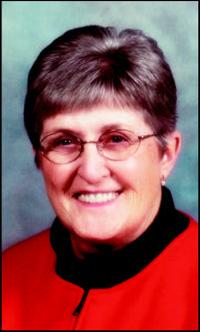 1932 – 2013
It is with deep sadness the family of Constance Elizabeth Wilford announce
her passing in Lethbridge on Tuesday, February 19, 2013 at the age of 80
years.
The Funeral Service will be held at Knox United Church, 4929 – 50 Avenue,
Taber on Saturday, February 23, 2013 at 2:00 P.M. with Reverend Aldeen McKay
officiating. Condolences may be forwarded by visiting our website at
www.southlandfuneral.com.
Connie leaves to mourn her loss, her husband of sixty one years, Dennis
Wilford and their daughters Karen (Daryl) Dunsmore of Taber, Shelley Barnard
of Kelowna, British Columbia, Sandra (Glenn) Becker of Cochrane and Kim
(Carey) Sulz of Qualicum Beach, British Columbia; six grandchildren Alyson
Dunsmore, Melissa (David) Russell, Shannon Barnard, Meaghan Barnard, Elliott
Sulz, Hannah Sulz and one great granddaughter Emily Russell. She is also
survived by three sisters Marie Garrison, Bernice Meredith and Enid Burnett;
two brothers Gordon Currie, and Arthur (Onagh) Currie; three sisters-in-law
Susan Currie, Ruth Currie, Beverly James and numerous nieces and nephews.
She was predeceased by her parents Anna and Daniel Currie; two brothers
Ewart Currie and James Currie; granddaughter Pamela Barnard and great
grandson Aiden Russell; sister-in-law Rose Currie and two brothers-in-law
Bruce Garrison and Bill Meredith.
Connie was born in Baldur, Manitoba on February 25, 1932. Until recently,
she enjoyed staying active through golfing and curling and was a keen
follower of current events. She was a member of the Order of the Eastern
Star for over fifty years. Connie looked forward to spending time with her
extended family. Her grandchildren and great grandchildren brought her
tremendous joy. She will be fondly remembered by all who knew her.
If friends so desire, memorial tributes in Connie’s name may be made
directly to the St. Michael’s Foundation (Palliative Care), 1400 – 9 Avenue
South, Lethbridge, Alberta T1J 4V5.
Arrangements in care of Southland Funeral Chapel, Taber. Telephone: (403)
223-8778.