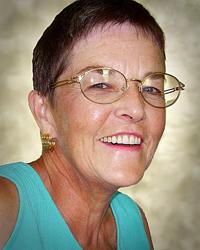 SHARON MAE SUCH, beloved wife of Joseph Such, passed away peacefully at the Chinook Regional Hospital in the presence of her family on March 18, 2013 at the age of 69.
Born July 3, 1943 in Turin, AB on her grandparents’ homestead, she went to school in Sundial and graduated from Vauxhall. Sharon lived in the Carmangay area most of her life. In her early years she worked at Loblaws, and then at the Carmangay Hospital as Head Dietician until 1990 when she retired due to her health. Sharon loved visiting and cooking large meals for friends and family. Her coffee pot was always on and she had homemade baking for everyone. She loved camping, playing cards, fishing and doing puzzles. She was a long-time member of the Royal Canadian Legion Branch #193.
Besides her husband Joseph, she is lovingly remembered by her daughter, Linda Egland Dyck (Blair); sons Lorne Egland and Brian (Chris) Egland; grandchildren Liza (Trent) Brereton and Jennifer Mazur (Char); great-grandchild Ella Brereton; sisters Nadine (Roger) Skretting and Sheila (Gail) Alcock; brothers Danny Dunn and Boyd (Sharon) Dunn; numerous nieces, nephews, extended family and long-time friends. Sharon is also survived by sister-in-law, Jolane (Joe) Toth; brothers-in-law, Alex (Ann) Such and Steve Varga.
She was predeceased by her parents Dale and Lena Dunn; mother-in-law Julia Such; brother-in-law Steve Such Jr.; sister-in-law Marg Varga and nephew Earl Alcock.
A Celebration of Life will be held Monday March 25, 2013 at 1:00 pm at the Mennonite Brethren Church 320-9 St N, Vauxhall with a private family inurnment to follow at Vauxhall Cemetery. In lieu of flowers donations can be made in Sharon’s memory to: MS Society, Lethbridge & Dist. Chapter, 724-13 Street North Lethbridge, AB T1H 2T1 or to the Canadian Cancer Society at www.relayforlife.ca – Click on Make a Donation and Search Team Name ‘Apple Juice Crusaders.’
Evergreen Cremation Services
327 – 10 Street South
Lethbridge, Alberta
Phone: (403) 329-4934
Send condolences: www.evergreenfh.ca

No Condolences for “SUCH Sharon”