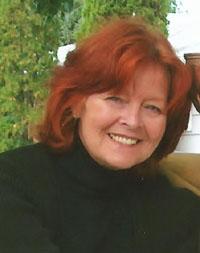 NOVEMBER 11, 1950 ~ APRIL 7, 2013
MS. CATHERINE “CATHIE” ANN MITCHELL beloved daughter of the late Doug and Marge Frier passed away peacefully at the St. Michael’s Health Centre on Sunday, April 7, 2013.
Cathie was born, raised and educated in Lethbridge. At the time of her passing she was a long time employee with the City of Lethbridge where she became friends with many of her coworkers, especially those in the “Dinosaur Club” who enjoyed mangy great times and meals together.
Cathie was a proud and caring Aunt who enjoyed the lives and successes of her nieces and nephews.
She is survived by her brother Grant (Colleen) Frier; her sisters Suzan (Eric) Giesreiter and Shari (Frank) De Coste; her nieces and nephews Kelly (Tom) Mortlock, Shannon (Cheyno) Finnie, Jennifer (Derek) Duke, Christine Geisreiter, Michael De Coste and Derek De Coste; great nieces and nephews Marcus, Russell, Nathyn, and Jordan Mortlock, Marshall, Emmitt, and Payton Finnie and Naia Duke.
At Cathie’s request, a private family service will be held.
For those who wish, memorial donations on Cathie’s behalf, can be made to the Canadian Cystic Fibrosis Society | 1130F 44th Avenue South East, Calgary, Alberta T2G 4W6 or the St. Michael’s Centre Palliative Care | 1400 9th Avenue South, Lethbridge, Alberta T1J 4V5.
Send condolences at www.mbfunerals.com.
Martin Bros. Funeral Chapels Ltd.
610 – 4 Street South
Lethbridge, AB T1J 4P3
Phone: (403)328-2361 Fax: (403)382-3623
Toll Free: 1-800-382-2901
www.mbfunerals.com

No Condolences for “MITCHELL Catherine”