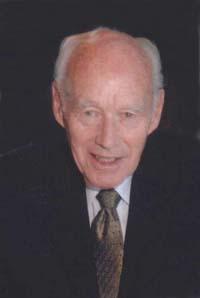 HOWARD ANSON SUGDEN, passed away in Cardston on Saturday, April 6, 2013 at the age of 87 years. Born July 29, 1925 to John and Elsie Sugden in Cardston, Alberta. Predeceased by his loving wife Lois Sugden in 2001; brothers, Lloyd, Harold; and sister, Melba (Redford).
He leaves behind his wife, Dorothy Mae Johnson Sugden; his 4 sons, Brent (Susan), Mike (Debora), Richard (Denise) and David (Rachelle). His posterity include 22 grandchildren and 40 great grandchildren.
Howard spent his life working hard to raise his family in the community of Cardston. He served faithfully in numerous positions in the LDS Church and in a number of community initiatives. During his retirement years he spent part of each winter season in Desert Hot Springs California where he made many friends and acquaintances.
A few years after Lois’s passing he married Dorothy Mae Johnson. A more loving and Compassionate companion than anyone could hope for, she has been a true blessing for Howard and his family.
Friends may meet the family at Legacy Funeral Home, Cardston (107 – 6th Street West) on Friday, April 12th, 2013, from 7:00 to 8:00 p.m. or at the Church from 10:00 to 10:45 a.m. prior to the Service.
The Funeral Service will be held in The Church of Jesus Christ of Latter-day Saints, Cardston Alberta Stake Center (East Hill) 338 – 5th Avenue East, on Saturday, April 13, at 11:00 a.m.
Interment in the Cardston Cemetery.
E-mail your condolences to: legacyfh@telus.net
Legacy Funeral Homes Ltd.
P.O. Box 208
Cardston, Alberta T0K 0K0
Phone (403) 653-3222
Fax (403) 653-3677
legacyfh@telus.net