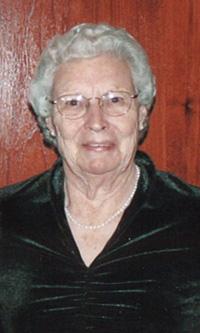 1931 ~ 2013
MRS. JEAN HILL of Lethbridge, beloved wife of the late Donald “Scotty” Hill, passed away on April 12, 2013 at the St. Michael’s Palliative Care Unit after a battle with pancreatic cancer at the age of 81 years.
She will be deeply missed by her daughter Bev (Wayne) of Lethbridge, son Marlin (Betty) of Vauxhall, and her grandchildren Brad (Kendra) Greve of Lethbridge & Charmaine (Eryin) Nelson of Taber. Jean was blessed with four precious great-grandchildren: Alexandra Haller, Austan & Anastyn Nelson and Trey Kallen.
She also leaves a sister Leona Wright of Vauxhall, a sister-in-law Olive Hart of Lethbridge and a brother-in-law Gerald Hill of Calgary and their families along with many nieces and nephews. Jean’s passing is also a great loss to her special friend and dancing partner Tom Sugden and his family of Calgary.
Jean was predeceased by her husband Donald in 2006, seven year old son Kevin and grandsons Dusty & Troy Kallen. She was also predeceased by her parents Clarence & Hannah Smith and her parents-in-law Goldwin & Mary Hill.
Jean was born in Claresholm on October 8, 1931 and moved to Retlaw at a young age. She attended school in Retlaw and Enchant. She took her teacher’s training in Calgary and taught in Travers, Enchant, Vauxhall, Rycroft, Wanham and Carstairs before moving back to Retlaw to the family farm in 1968. Scotty and Jean enjoyed twelve winters in Yuma, Arizona. They retired to Coaldale in 2000 and after Scotty’s passing, Jean moved to Black Rock Terrace in Lethbridge where she met many new and dear friends.
All those wishing to make a donation may do so in Jean’s name to St. Michael’s Palliative Care, 1400 9 Avenue South, Lethbridge, T1J 4V5.
A private family inurnment will be taking place in Enchant Cemetery.
Send condolences at www.mbfunerals.com.
Martin Bros. Funeral Chapels Ltd.
610 – 4 Street South
Lethbridge, AB T1J 4P3
Phone: (403)328-2361 Fax: (403)382-3623
Toll Free: 1-800-382-2901
www.mbfunerals.com