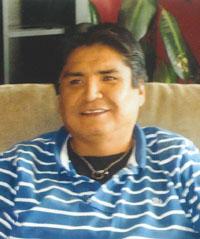 was born on July 29,1969 in Fort Macleod. He was called back home to be with our creator on April 18, 2013, surrounded by his family. Kerry was born to the late Doris Day Chief and late Edmund Wolf Child.
Kerry’s trade mark is his smile and his humble demeanor and he loved to be his family and friends. Kerry was known for his many talents and followed his traditional ways. He enjoyed the Pow-Wow trail and was a member of the Calf Robe drum group. Of his accolades he professed was the drum group that won the “World Championship Drumming at the Gathering of Nations Pow-Wow in Albuquerque New Mexico. As a young man he was known to be a bull rider. His passion was working with his father’s race horses and was an avid mechanic. Kerry attended Stand-off Elementary School, Kainai High School, Red Crow College, and Lethbridge College.
Kerry is survived by his children Tucker, Wyatt, Connelly and Dylan. His brothers Leon (Tara) Kelsey, Bradford (Chelsea) Buck and sisters Cindy, Tracy(Armond), Liza (Larz) and Christy (Tommy) also his uncles Winston(Martha) Wilton (Trina) Chester (Bonnie) Bruce (Carla) Perry & Gilbert (Shirley) Aunts Rosaline, June, Rita (Keith), Julanna, Harriet, Laverne (Rod) Patsy Delia (John) Geraldine (Richard ), Josephine, Catherine, Stella, Theresa (Alfie ) and Joyce (Lambert) and his step mother Noreen, As well nemorus nieces, nephews, cousins and extended family.
He was predeceased by grandparents Victor and Lucy Day Chief, Sam & Elizabeth Wolf Child brothers Robbie and Bradley, Uncles Jarvis, Samuel and Martin aunts Alfreda, Judy Kay and Martha, Cousins Hobo, Brent, Kevin, Marvin, Beavers, Jodi, and Rochelle.
He will be missed by all those that knew him.
The Wake Service will be held at the Old Saipoyi School, Blood Reserve on Tuesday, April 23rd, 2013 from 7:00 to 11:00 p.m. then continuing all night at Kerry’s Residence in Stand Off.
The Funeral Mass will be held at the St. Mary’s Catholic Church, Blood Reserve on Wednesday, April 24th, 2013 at 11:00 a.m. Interment in the Wolf Child Family Cemetery, Blood Reserve.
Arrangements entrusted to Berry Gorham
Legacy Funeral Homes Ltd.
P.O. Box 208
Cardston, Alberta T0K 0K0
Phone (403) 653-3222
Fax (403) 653-3677
legacyfh@telus.net

No Condolences for “DAY CHIEF Kerry”