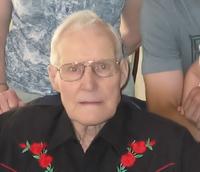 August 31, 1921 – April 19, 2013
Robert (Bob) Smith, beloved husband of Bertha Smith of Claresholm, Alberta passed away quietly on Friday April 19, 2013 at the Chinook Regional Hospital in Lethbridge, at the age of 91 years, with his two daughters by his side.
Robert was born in Margo, Saskatchewan on August 31, 1921. As a young man he joined the armed forces where he served as a cook, and that journey inspired him to move on and train as a registered chef.
“Bob” worked as a chef for 27 years at the Fort Qu’Appelle Sanatorium, where he prepared meals for both the staff and for the many patients who were afflicted with tuberculosis. In 1972, Robert and his family moved to Claresholm, Alberta, where he worked for 14 years at the Claresholm Care Centre until his retirement in 1986.
Bob was married to Bertha “Bea” Smith (Renz) and had recently celebrated their 65th wedding anniversary. He is also survived by his two daughters, Darlene Wetherill of Regina Sask. and Sherry Smith (Mario Potocnjak) of Lethbridge; his grandchildren Candace Wetherill (Martin), Darren Wetherill (Jody) and step grand-daughter Randi (Cory) made him extremely proud, as did his great grandchildren Morgan, Ryker, Bowden, Jesse and Emma.
Bob was passionate about his work, his family, and his faith in God. Both he and Bertha were strong members of the Porcupine Hills Classic Cruisers Car Club, and he enjoyed taking his 1973 Ford half ton and his wife’s 1971 Mustang to all the rallies, where they were both honored for their long-time membership.
Bob had many friends, and will be missed by all of us who loved him. In lieu of flowers, memorial donations may be given to the Heart and Stroke Foundation of Lethbridge.
The family of Robert Henry Albert Smith would like to thank the Chinook Regional Hospital staff for their untiring work, understanding, and dedication.
A Funeral Service will be held on Wednesday, April 24, 2013 at 2:00 PM at the Faith Community Baptist Church (4404, 3rd Street West), Claresholm, Alberta with Pastor Art Hildebrand presiding. Interment will follow at the Claresholm Cemetery.
Condolences may be forwarded to the family by visiting
www.leydens.com. Arrangements entrusted to LEYDEN’S FUNERAL HOME, Claresholm. Tel: 403-625-3212.

No Condolences for “SMITH Robert”