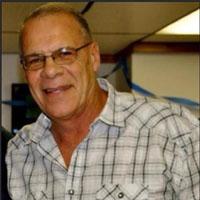 1952 ~ 2013
On Thursday, April 25, 2013 we suddenly lost an amazing man, Steve DeRenzo at the age of 60 years.
Steve was the husband of Teresa; father of Jory; soon to be father-in-law to Amanda; son of Willy and Louis; brother to Ria, Kay, Louise, Diane, Tony and Debbie; brother-in-law to Warren, Doug, Taco, Gloria and Jayson; lifelong companion to Charlie and the Digger’s; known to grandson Brandon as “Paps”; and known to granddaughter Kylee as “Papa.” The unconditional love Uncle Steve had for all his nephews and nieces was indescribable. His friends called him Poppa Stevo, Mr. D or Stevo. He is also missed by our extended family “The Kelly’s.” He always introduced himself to the great nephews and nieces by shaking their hands and introducing himself with “Hi, I’m Uncle Steve” as they would look up in awe. His sense of humor is legendary.
A Funeral Service will be held at 1:00 pm on Wednesday, May 1, 2013 at MARTIN BROTHERS RIVERVIEW CHAPEL, 610 – 4 Street South, Lethbridge, with cremation to follow.
Send condolences at www.mbfunerals.com.
Martin Bros. Funeral Chapels Ltd.
610 – 4 Street South
Lethbridge, AB T1J 4P3
Phone: (403)328-2361 Fax: (403)382-3623
Toll Free: 1-800-382-2901
www.mbfunerals.com

No Condolences for “DERENZO Steve”