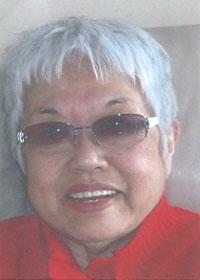 MRS. MICHIKO “MIKKI” PASCAL, beloved wife of the late Mr. Norman Pascal, passed away at St. Michael’s Palliative Care Centre on Friday, April 26, 2013 at the age of 72 years.
Mikki has four surviving sisters and one brother: Betty Nakamura of Raymond, Alberta, Jane Ram, Tokie McKay, and Rose Nakamura of Campbell River, BC and Harry Nakamura of Calgary. She also has two brothers-in-law: Wayne (Lois) Pascal of Tuscan, Arizona and Alan (Elaine) Pascal of Sundridge, Ontatio.
Mikki is survived by all her stepchildren and grandchildren: Kimberly and Lou Cucoch (Christopher and Cory), Anthony and Joanna Pascal (Nicholas), Paul and Kate Pascal (Amber and Ryan) and Nicola Pascal.
Mikki’s last wish was to thank all of her friends who supported her at her worst time in her life. A very special thank you goes to Valerie Caffet, Mac and Reiko Nishiyama, and the nurses and staff at the St. Michael’s Palliative Care Centre.
The family would also like to especially thank Wendy Hamper for all her love, care and support for Mikki in her final days and hours.
A Memorial Service will be held at CORNERSTONE FUNERAL HOME – 2800 Mayor Magrath Drive South, Lethbridge, Alberta on Wednesday, May 1, 2013 at 1:00 P.M.
In lieu of flowers and in memory of Mikki, donations may be made to the St. Michaels Palliative Care Centre – 1400 9th Avenue South, Lethbridge, Alberta, T1J 4V5 or to a charity of your choice.
Norm and Mikki were together in life, and now, will be together again in eternity.

No Condolences for “PASCAL Michiko”