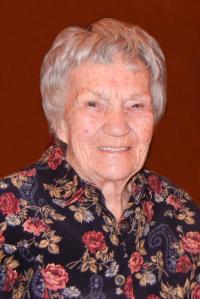 1922 ~ 2013
Family and friends are invited to a “Come and Go Celebration” of June’s life on Saturday May 11th from 11 am to 2 pm at the HOLIDAY INN LETHBRIDGE, 2375 Mayor Magrath Dr. S. Lethbridge, AB (corner of Scenic Drive and Mayor Magrath Drive S).
June Smith wife of the late A. Douglas Smith passed away in Lethbridge on March 16th, 2013.
June was born June 9th, 1922 in Lethbridge. She was raised on an acreage by the Coutts Highway where her dad had an Abattoir. She attended McLean School, (a one room country school) for 10 years but graduated from LCI. She later went on to Garbutt Business College and worked a short time at Baalim Motors.
June and Doug were married in 1941. Their first home was a canvas tent, with a wooden floor, in “tent city” on the air force base in Ucluelet, BC. This was where Doug was stationed during the first part of the war. Their first child, Gail was born in Victoria, BC and spent her early years in “tent city”. After the war June and Doug moved to Edmonton while Doug attended the U of A and upon his graduation they returned to Lethbridge.
June was a family orientated person and was always willing to help out others when the need arose. June was involved with various activities the children were in such as Boy Scouts, Brownies, Lethbridge Amateur Swim Club, Track and Field and Sunday School. She enjoyed hobbies that were done by hand and was always coming up with some creation to do with the family. She was also active in the Old Man River Potters Guild for many years. Growing up on the farm gave her an appreciation for nature which was evident in her later activities and shown through various articles in her home. She was not wasteful and liked to extend the life of an item or find another use for it. She recovered many chairs, covered cardboard boxes with wall paper, made quilts from scraps of material or old clothes, created her own lamp coverings and wall hangings. She was very crafty in that she sewed clothes, curtains, bed skirts etc. for herself and others. June loved to know and share history. She played an active role in gathering information for the printing of the McLean School District history book and also put together family history books and the family genealogy tree for her children. Growing up there were many family vacations. June and Doug also travelled on their own, with one of their most exciting and enjoyable holidays was 11 weeks spent on a sail boat in the Carribean. Many memories were also made on their annual trips to Hornby Island.
June is survived by her children Gail (Fred) Umeris, Harry (Liz) Smith, Susan (Gary) Scovill, Douglas (Wendy) Smith; her grandchildren Sherri (Paul) Bohnert, Cameron (Elaine) Umeris, Darren (Samia) Umeris, Fraser (Maria-Isolina) Smith, Travis Smith, Hilary (Tom) Lungu, Nicole (Reuven) Freesman, Kimberly Scovill, Amy (Jeff Linn) Scovill, Riley Smith, Janay Smith, and Lacey Smith; great-grandchildren Tyson, Jeremiah, Kiann Bohnert; Mahala, Julian, Jessie Umeris and Luca Smith; her sister Dorine Boulton, brother and sister in law Les & Kay Reid, cousin Florence Totten and nieces & nephews.
June was predeceased by her parents Dora & Harry Hearne, brother & sister in laws Dick Boulton, Thelma & Jack Blenner-Hassett, and Rod & Jean Grant.
June always said “I am 90, and I have had a good life, don’t be sad when I am gone.”
Send condolences at www.mbfunerals.com.
Martin Bros. Funeral Chapels Ltd.
610 – 4 Street South
Lethbridge, AB T1J 4P3
Phone: (403)328-2361 Fax: (403)382-3623
Toll Free: 1-800-382-2901
www.mbfunerals.com

No Condolences for “SMITH June”