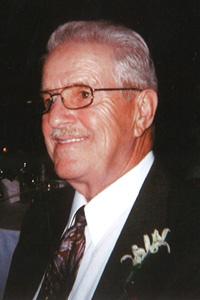 1928 ~ 2013
George Ramon (Ray) Le Grandeur passed away, surrounded by his family, on Sunday, May 26, 2013 at St. Michael’s Palliative Care Unit at the age of 84 years after several battles with cancer.
Ray was born in Bassano, Alberta, raised in Beaver Mines and Pincher Creek and grew up part of a large family. He was a talented athlete, excelling in baseball, hockey, curling, and golf. He was part of many winning teams including the Pincher Creek Juniors winning the Southern Alberta Junior Baseball Championship in 1948. He was a scratch golfer and spent many happy hours on the golf course. Ray was a cowboy at heart and loved to watch rodeo. His father Pete and his Uncle Emery were both inducted in the Canadian Rodeo Hall of Fame and his sister Mary McGhie was a Canadian Barrel Racing Champion. Ray lived and worked in Pincher Creek, Lethbridge, and Calgary working in the sales industry, retiring back to Lethbridge in 2004.
Ray is survived by his wife of 42 years Velma (Val) Le Grandeur, his children Jerry (Dianne) Le Grandeur and Lana Le Grandeur (Bruce Weberg); Val’s children Greg (Barb) Lazaruk and Larry (Margie) Lazaruk; 12 grandchildren; 9 great-grandchildren; his twin brother Robin (Barbara), brother Ivan (Marianne), sister-in-law Kay Le Grandeur, brother in-law Rex Brentnall and Val’s extended family.
He was predeceased by his parents Pete and Edith; sisters Esther, Mary, and May, his brother Dan and grandson Jeff Madden.
A Memorial Service will be held at 1:00pm on Friday, May 31, 2013 at MARTIN BROTHERS RIVERVIEW CHAPEL | 610- 4th Street South, Lethbridge.
In lieu of flowers, donations may be made to St. Michael’s Palliative Care | 1400- 9th Avenue South, Lethbridge, AB T1J 4V5.
Send condolences at www.mbfunerals.com.
Martin Bros. Funeral Chapels Ltd.
610 – 4 Street South
Lethbridge, AB T1J 4P3
Phone: (403)328-2361 Fax: (403)382-3623
Toll Free: 1-800-382-2901
www.mbfunerals.com

No Condolences for “LE GRANDEUR George”