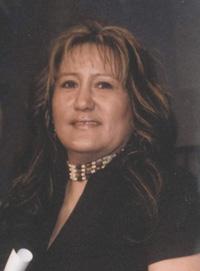 With heart breaking sadness and shock that we announce the passing of our Dear mother, grandmother, daughter, sister, aunt, great aunt, niece, and cousin LEANNE TERRI BEAULIEU (nee MELTING TALLOW) on May 28th, 2013 at the age of 43 years..
Leanne and her twin brother Leon were born to Mildred and (late) Clarence Melting Tallow on September 19, 1969, a wonderful surprise to siblings Jeff, Debbie, Sonny, Andrew (Cindy), Barry, and Todd. Leanne and Lee grew up in a huge loving family as everyone pitched in for diaper changes and all. The twins attended elementary and Jr. High school in Cardston; and Leanne graduated from Kainai High in 1988. Throughout her Jr. & Sr. High school Leanne excelled in sports and thoroughly enjoyed spending time with her childhood friends and family. After graduating grade 12, Leanne was hired on to work as an Assistant Accountant at the Kainai Community Corrections. With this, it inspired her to further her skills in accounting, however,she had to hold off for a couple of years as she and her high school sweetheart welcomed their son, Byron. Byron was the love of her life, and as her relationship ended, she continued raising her son as a single parent, of course, with the help of her mother and step-dad John Tallow. In 1994, she moved to Edmonton to attend NAIT, specializing in the Accounting Program. After graduating in 1996, she immediately found employment at an elementary school in Edmonton. During then she met her future husband, Bruce Beaulieu and together they welcomed twins Taylor Jade and Tasha Jewel. They resided in Edmonton until 1999, they moved to Cardston, to be closer to home. Then with her expertise in Accounting she gained employment with the Kainai Board of Education in 2000. In 2003, she was devastated when her marriage ended – this changed her life drastically and she couldn’t move on as “her marriage vows” were so sacred and were supposed to be forever! She missed Bruce so much that nothing mattered. She prayed, using her faith in Jesus Christ that her family would reunite, she moved to St. Catherines to attend the Celebration Bible College for a year to help give her hope and strength to repair her marriage, but unfortunately it didn’t and eventually got sick and couldn’t take care of herself. She attended Kapowan Treatment Center in 2011 and met her special friend Jack Chalifeaux. She resided in Grouard, Alberta, until March of this year as her first grandchild, Michael Merlin, was born to Tasha and Jeremy Bevans; she wanted to be there for her daughter.
Leanne had a huge extended family besides her Mom, children, son-in-law, grandchild, siblings, and adopted sister Sheryl Day Chief. She was a niece to aunts Clara (Mike) Sigurdur, Sylvia (late Punch) Tailfeathers, Rosanne Many Fingers, and Marie (Don) Shade. Uncles: Les Tallow, Herbert (Myrna) ManyFingers, and Burton (Virna) Many Fingers. Numerous nieces and nephews; lots of cousins and very close friends especially Annette & Rennie Soup. She was predeceased by her Dad, Clarence, her sister Karen, brother Todd, nephew Ramsey,her dog Cinnamon, her maternal grandparents Albert and Margaret (Soop) Many Fingers and her paternal grandparents Paul and Jenny (Healy) Melting Tallow. Her uncle and aunt Gordon and Loretta Many Fingers and aunt Mary Rose. Her uncles Albert Many Fingers Jr. and Evans Melting Tallow. Her cousins, Kimberly, Lacey, Brielle, Sheldon, Sharla, Tweedy, Lyndsey, & Jessica Many Fingers, and William Morin.
A Family service will be held on June 4, 2013, at Legacy funeral home from 5 – 6 pm.
The Wake Service will be held at the Gladstone Hall, Blood Reserve on Tuesday, June 4th, 2013 from 7:00 to 10:00 p.m.
The Funeral Service will be held at the Gladstone Hall, Blood Reserve on Wednesday, June 5th, 2013 at 11:00 a.m., with Pastor Ruby officiating her celebration of her life and the final farewell to be in the loving arms of Jesus. Our beautiful Angel – rest in peace now. Interment in the Pioneer Cemetery, Blood Reserve.
Legacy Funeral Homes Ltd.
P.O. Box 208
Cardston, Alberta T0K 0K0
Phone (403) 653-3222
Fax (403) 653-3677
legacyfh@telus.net

No Condolences for “BEAULIEU Leanne”