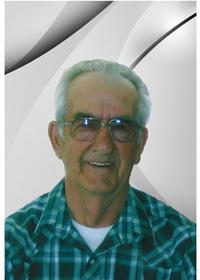 MR. HENRY JACOB BLOCK, beloved husband of the late Mrs. Mary Block, passed away at the Milk River Hospital on Saturday, April 20, 2013 at the age of 87 years.
Henry was born on December 24, 1925 in Myrtle, MB and raised in Beechy, SK. He is survived by his two daughters, Deborah Block and Gwen (Rick) Chamberlain, and his precious grandchildren, Erin Meek, Ryan (Lindsay) Chamberlain and Taylor Chamberlain, brother George Block, sisters Selma (Henry) Reimer, Adeline Tacholsky, Anne Tacholsky and Marion (Robert) Andres, special in laws Don Rose, Mickey Tolman and Monte Rose and many nieces and nephews (the ‘hoodlums”). He was predeceased by his parents, Jacob and Susie Block, two brothers, Jake and Albert, and four sisters, Tina, Sara, Susie and Helen. He will be deeply missed by those who loved him and those whose lives he touched.
A Memorial Service will be held at ARROWWOOD COMMUNITY HALL, Arrowwood, Alberta, on Saturday, June 8th, 2013 at 2:00 P.M. Reverend Sue MacDonald presiding.
Honoured to Serve
Cornerstone Funeral Home & Crematorium
2800 Mayor Magrath Drive South
Lethbridge, Alberta T1K 7B1
Telephone ~ (403) 381-7777
Fax ~ (403) 381-3128
Toll Free ~ 1-(888)-381-7778
care@cornerstonefh.ca

No Condolences for “BLOCK Henry”