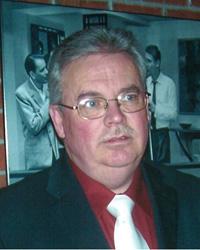 It is with immense sadness that we announce the passing of Percy Glen Nordin. Percy passed away peacefully in his home town of Lethbridge on Saturday, June 8, 2013 with his family by his side at the age of 58 years.
Survived by his two sons: Dustin (Sara) Nordin and Jesse (Megan) Nordin, mom and dad Rudy and Lorraine Nordin, sisters Glenda (Scott) Young, Crystal Nordin, Debbie (Jeff) Blair and brother Rudy (Donna) Nordin and numerous nieces and nephews and great nieces and nephews.
Percy was predeceased by his Grandma and Grandpa Rosena and William Montgomery, Mary and Percy Nordin and Pete Dutka, sister April Lynn Semak, Patricia Rosemary MacFarlane and brothers Grant James Nordin and Dean William Nordin.
Percy was born in Moose Jaw, Saskatchewan May 8, 1955. When he was 10, Percy and family moved to Lethbridge, Alberta to pursue family priorities. Percy attended Galbraith Elementary, Wilson Junior High, and then Winston Churchill High School in which he graduated in 1973. Once high school was completed, Percy started working at Woolco Department store and with his hard work ethic, Percy was able to progress within the company moving to Edmonton, and then Calgary.
Percy then started with Woodward’s department store in which he had tremendous success and moved up rapidly within the company moving to many locations while starting his own family. In the later years of Percy’s life, he worked as the Warehouse Manager for 13 years with Leon’s Furniture in Lethbridge and finished off his career with Home Depot also in Lethbridge as the night receiving supervisor.
Percy was an avid sports fan and a lover of the outdoors especially if it meant spending time with his 2 sons. He particularly enjoyed camping and fishing in the summer with family. Percy was a friend and mentor to many, many people. He will be missed by all those he touched.
A Memorial Service will be held at EVANGELICAL FREE CHURCH – Highway 4 just East of 43 Street Intersection, Lethbridge, AB on Saturday, June 15, 2013 at 1:00 P.M. with Sandra Habkirk officiating.
Percy has asked that everyone dress casually, without formal attire or suits for his memorial.
Honoured to Serve
Cornerstone Funeral Home & Crematorium
2800 Mayor Magrath Drive South
Lethbridge, Alberta T1K 7B1
Telephone ~ (403) 381-7777
Fax ~ (403) 381-3128
Toll Free ~ 1-(888)-381-7778
care@cornerstonefh.ca