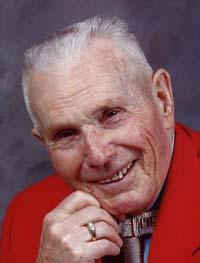 John Henry Urwin (Harry) quietly passed away in Fort Macleod, Alberta while hanging out with his son Bob on June 5, 2013 in his 90th year. Harry was born to John & Minnie Urwin on June 14, 1922 in Moose Jaw Saskatchewan. He was the youngest of 5 sisters and 1 brother. He is survived by his son Bob (Kathleen Beagle); two sisters-in-law: Gracie Landage of Airdrie, Ab and Thelma Elliott of Moose Jaw, Sk; numerous nieces and nephews as well as his adopted family – Dwayne and Georgina Donald and their son Kesho of Edmonton, Alberta. Dwayne and Georgina lived across the street from Harry in Fort Macleod and after Kesho was born, Harry became “Papa Harry” to Kesho.
Harry attended school in Moose Jaw through Grade 12. He then attended the tech school in Moose Jaw and studied to be a motor mechanic. His schooling was cut short when on December 11, 1941 he joined the Royal Canadian Navy and shipped out to Esquimalt, BC for training whereupon he found himself on a dock staring up at “a very big boat” which was probably quite a shock coming from the prairies and having only previously seen boats on a lake. He served his navy career in the Atlantic Ocean, getting together small convoys at Halifax, NS or St. John’s NF and taking them to the New York area to join up with larger convoys. He said that he had a “million dollar experience for 25 cents a day” (how much he got paid). He was honorably discharged from the Navy on May 8, 1945 after 41 months of service. He then returned to Moose Jaw and opened a second-hand store. After being in business for approximately 1 year, the store burned to the ground. Apparently the hot plate he used to heat his lunch was the cause of the fire. After that Harry started working with Canada Packers and was eventually promoted to travelling salesman.
He met the love of his life, Audrey Elliott in Moose Jaw sometime in the mid-1930’s when Audrey found $2.00 that he lost while delivering newspapers. It was to Audrey’s disappointment when her mother told her that “someone has lost that money and you need to find out to who it belongs to.” Audrey was able to locate Dad and return the money. Over the next few years Dad and Audrey managed to stay in touch and they were married April of 1951. Canada Packers transferred Harry and Audrey to Sudbury, Ontario and in May of 1956, their son Bob was born. In the spring of 1961, Harry packed up the gang and moved to Fort Macleod where he worked at the Java Shop restaurant and Greyhound bus depot with his sister Norah Huber and her husband Fred who owned the business at that time. In summer of 1962, Harry and Audrey bought the Mountview Restaurant in Pincher Creek and moved there. They operated that business until the summer of 1965 when Fred and Norah sold the Java Shop to Harry and Audrey. They sold the Mountview and then moved back to Fort Macleod and operated the restaurant and bus depot until they retired in 1977. They continued to live in Fort Macleod until their passing (Audrey passed away in January of 1986).
Harry was a town councilor in Fort Macleod and served 3 terms from 1980 to 1989. He was also a member of the Al Azhar Shriners; past master of the Alberta Lodge AF & AM #3 as well as associated with numerous public boards and committees. He delivered Meals on Wheels for 12 years. He was twice president of the Fort Macleod Historical Association. He was a member of the United Commercial Traveller’s for 61 years. He was made a life member of the Royal Canadian Legion in 2010. He was also a life member of the Southern Alberta Antique and Classic Auto Club (SAACAC), joining the club in 1969 and a life member of the Alberta United Motorcycle Club. He was also a member of the Airflow Club of America, joining the club in 1986.
Harry was very devoted to his passion of antique cars. At one point, Harry had 23 cars and trucks, 20 of which were antiques. He even bought a car on Christmas Day while he and Audrey were in Kelowna visiting with his in-laws, Jack & Beryl Elliott. Jack told Harry about a 1957 Imperial he knew was for sale. He called the owner who then invited them over to look at the car. A deal was done. Audrey was somewhat perplexed about this and commented – “don’t we have enough cars and…. buying one on Christmas Day??” That was just one of many deals that Harry made over 50 years of fooling around with cars. One of his great friends in the Airflow Club in the United States was Harold Irwin who owned the same year and model of Airflow as Dad. It made for great conversations over the years about Harry & Harold and their cars.
He was also a great “people person” and loved to meet people. He also loved promoting the Town of Fort Macleod because it was his home and he was very proud to live there and be with the great people of the town. He touched a lot of lives.
A service to celebrate Harry’s incredible life will be held at 2:00 P.M., on Monday, June 17, 2013 at the FORT MACLEOD COMMUNITY “ELKS” HALL 307-25th St., with Reverend Eras Van Zyl, Officiating.
Memorial Donations may be made in Harry’s memory to the Royal Canadian Legion – Poppy Fund, P.O. Box 697, Fort Macleod, AB, T0L 0Z0 or to your local Meals-On-Wheels program.
Eden’s Funeral Home and Crematorium
2424 – 5 Avenue
Fort Macleod, AB
Phone: 403-553-3772
Email: condolences@edensfuneralhome.com
www.edensfuneralhome.com

No Condolences for “URWIN John”